I am not quite sure when I first fell in love with the fountain grasses but there is something rather seductive about their fluffy often almost caterpillar like cylindrical rounded heads of flower that are so enthusiastically produced over the summer months that I find it impossible to resist their particular appeal. And I have long since given up trying! 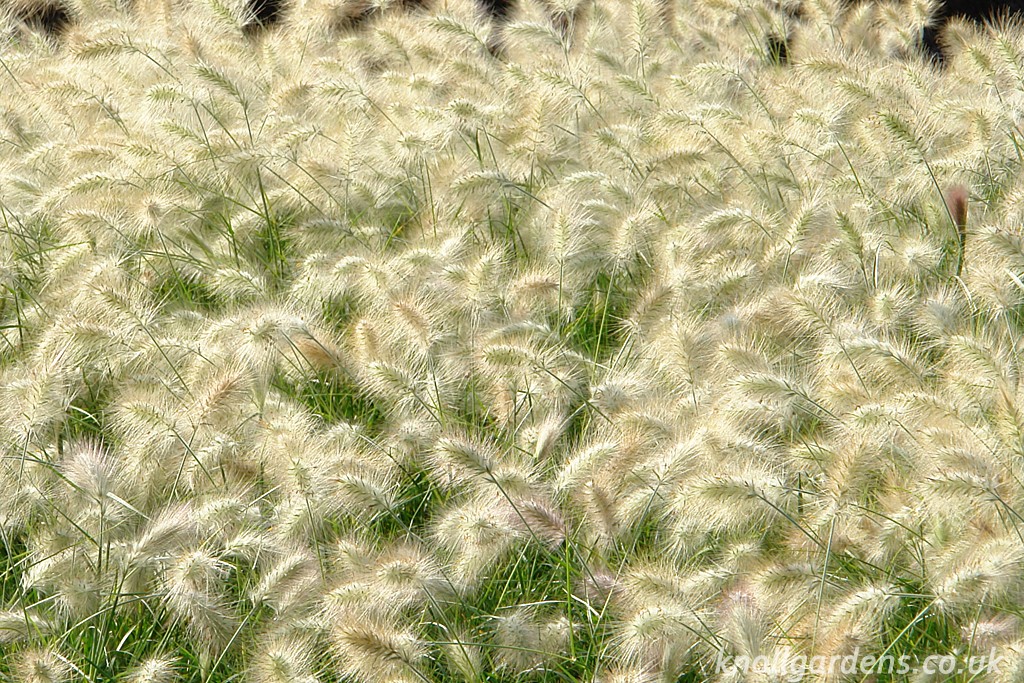 Take for example Pennisetum villosum in the picture above which I think typifies the flower production abilities of this group of ornamental grasses and perhaps explains why Pennisetums have the common name of fountain grass; the flowers are produced in such a way and in such quantities as to appear almost fountain like as they cascade down the plant.
The foliage is not particularly special in most fountains, but this is hardly a great issue when the leaves are covered for a large part of the year by such a copious amount of flower.

Fountain grasses are actually quite a large family but coming from much warmer parts of the world than the UK we can only grow a small proportion here that can be considered generally hardy given the right conditions.
The right conditions being, without exception, full sun and reasonably well drained soils. While pennisetums will grow in any average garden soil, they are very intolerant of winter wet, so if you have sunny open places, and it doesnt tend to matter how dry, then the fountain grasses are likely to be happy. 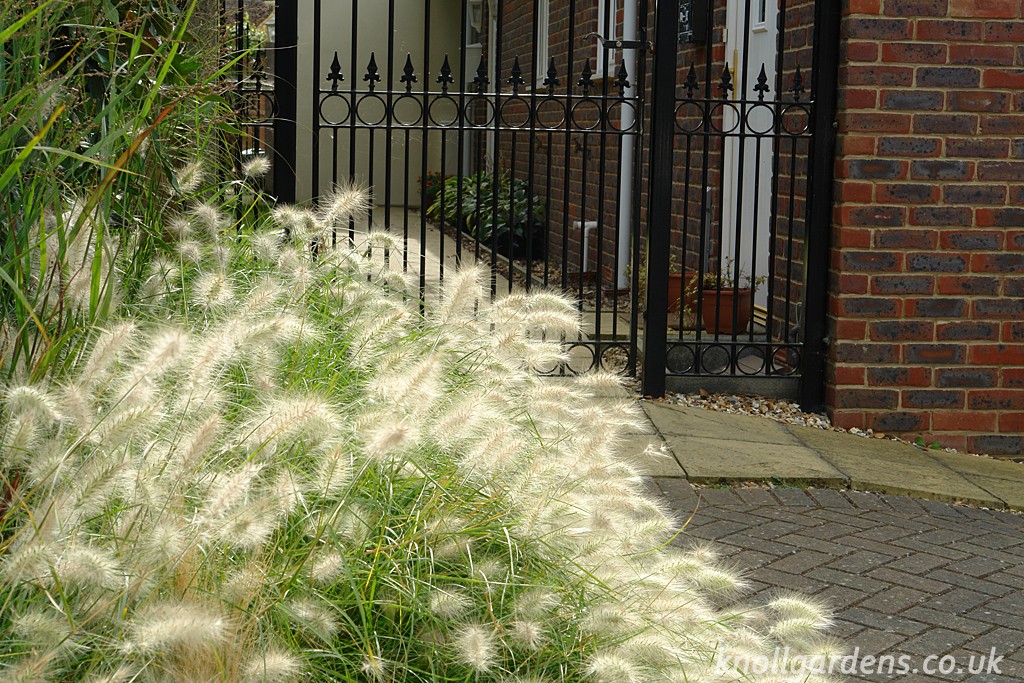 Going back to Pennisetum villosum this has perhaps the reputation for being the least hardy of those we can grow outside but as you can see above it is performing wonderfully by the entrance to this private house in an area that has generally heavy soil but is well drained as it is planted on a bank. It has been there for some years now and as you can see is very happy! 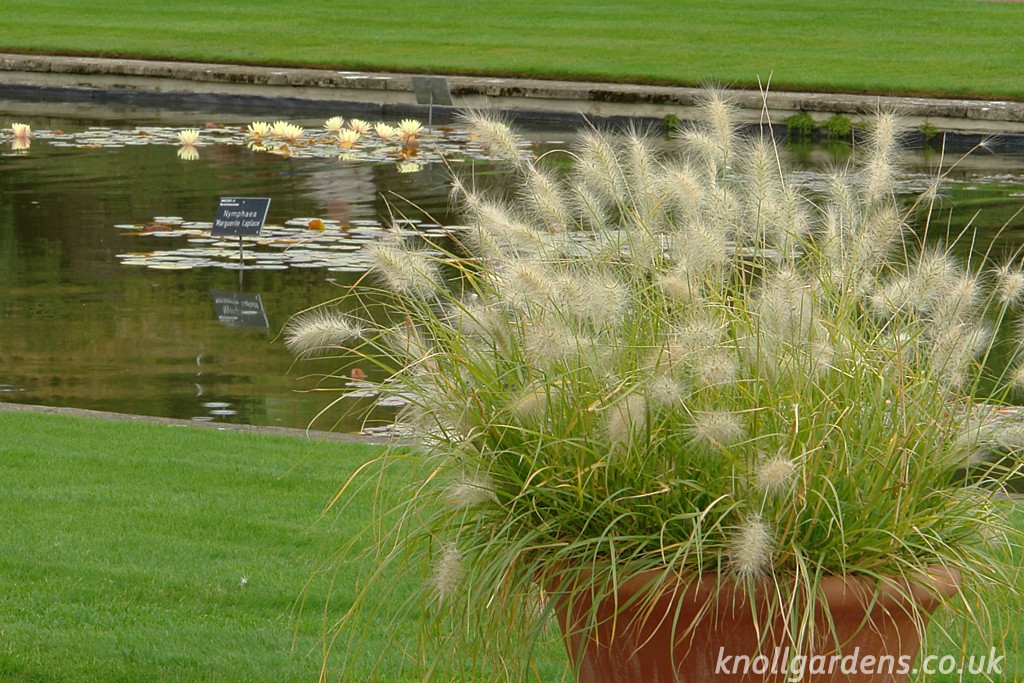 Being sun lovers that revel in the heat and the dry all fountains make great container plants and in the image above you can see the adaptable Pennisetum villosum in action again, this time alongside the canal at the RHS Garden Wisley.

Pennisetums tend to flower in the second half of the year and like all grasses will hold their gradually drying flowers right the way through the autumn, through winter and even with some into the spring. Being deciduous (at least all the hardy ones we can grow here), the old growth can be cut back to the ground every spring in readiness for the new seasons growth to come through. Fountains are late season grasses which in gardening terms simply means they are rather late to come into growth in the spring, but once they do start they grow comparatively fast. For this reason, and especially in colder areas, we tend to suggest not cutting back fountains too early and to leave last seasons growth intact, as a sort of thermal blanket, until the risk of serious frost is past. 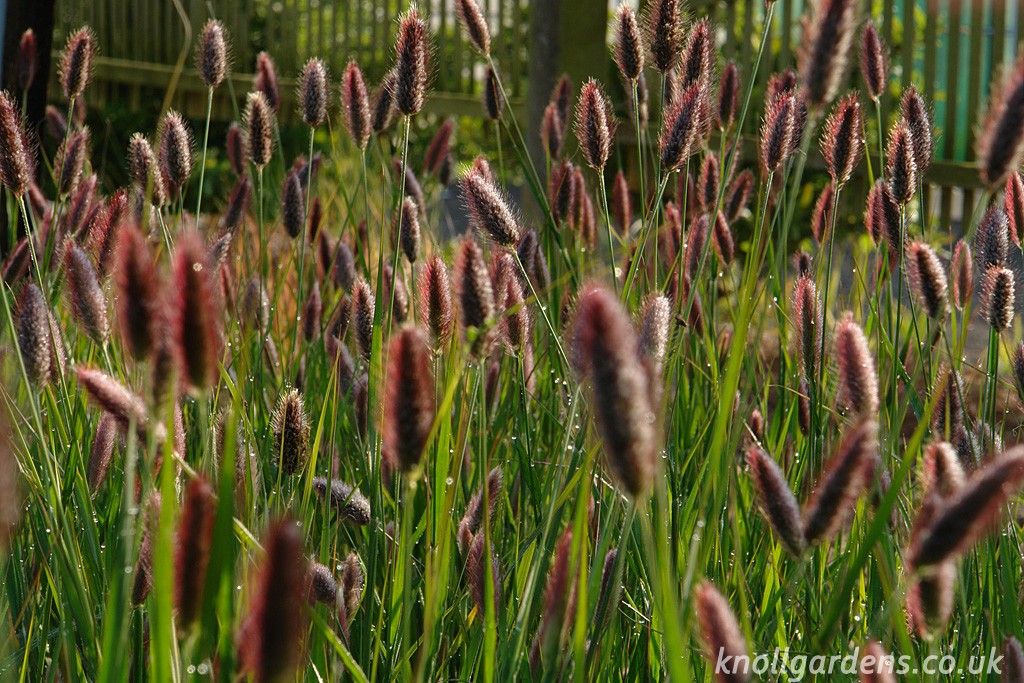 Probably the first to come into flower around the middle of the year, is the rather fabulous Pennisetum Red Buttons. From healthy mounds of bright green foliage come rounded button like red flowers which as ever are enthusiastically produced. Although delicate looking, fountains can make quite large clumps once established. Those we grow in the UK are not runners from a gardeners point of view, but have a clumping habit which gradually enlarges with age. 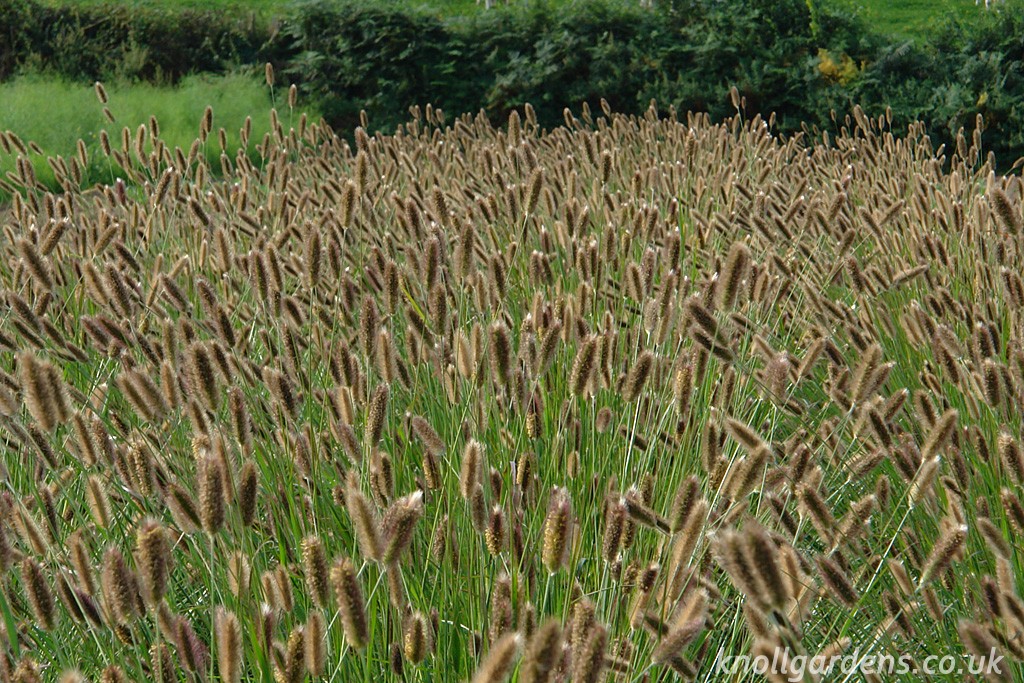 Red Buttons in some conditions will occasionally have a short rest from flower production and then, in common with all fountains, will evetually stop flowering with the coming of the frosts and the lower light. Even then, as with so many grasses, the autumn and winter display of dried heads is pretty noteworthy. 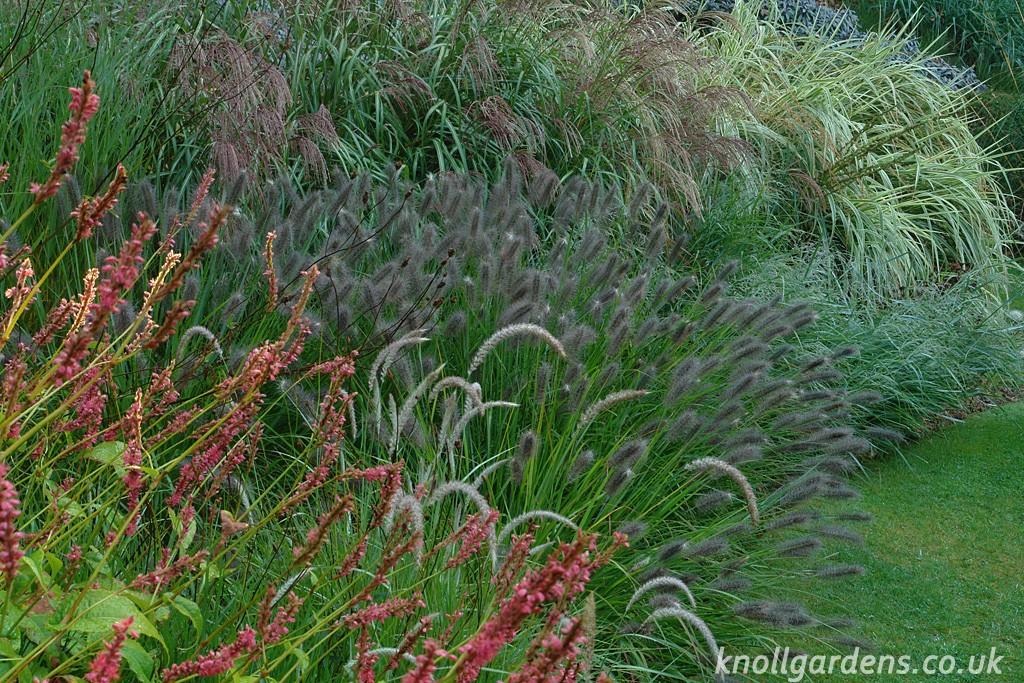 Pennisetum Red Head is a fairly recent cultivar of the species Pennisetum alopecuroides which itself does not perform too well here in the UK. However it has many cultivars and these all make first class garden plants. Red Head is a superb example of these cultivars having a distinctive rounded shape that is covered by large fluffy heads which are at first red but quickly fade to many shades of dark brown to almost black. To see these plants in full flower in a misty morning dew is quite special as they seem to quite literally grow in size and ‘fluffiness’. 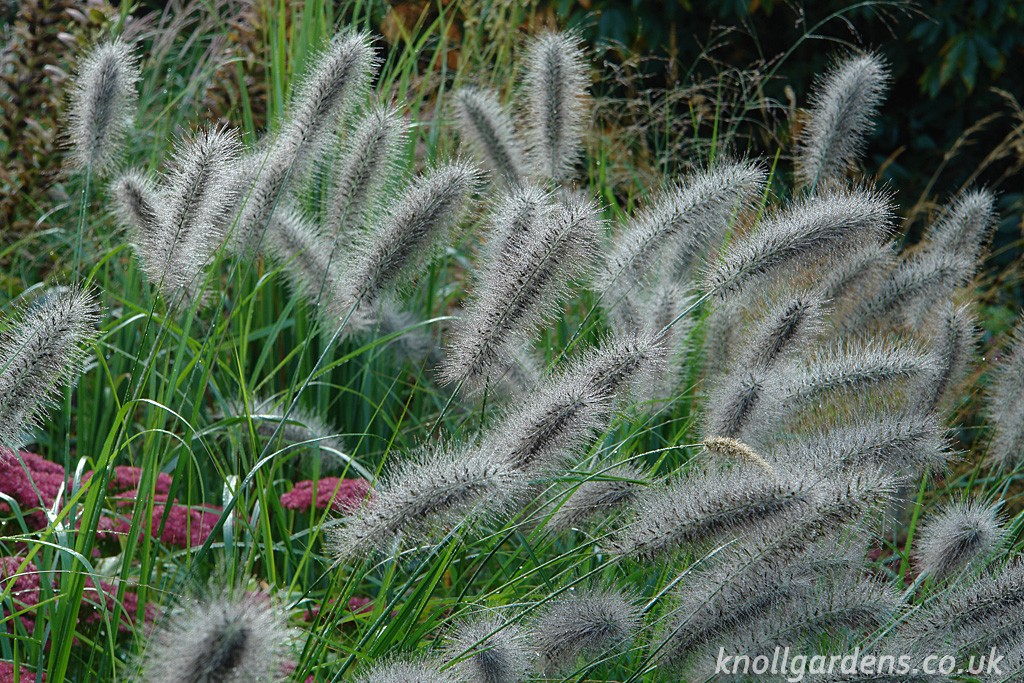 Another great cultivar of Pennisetum alopecuroides is Pennisetum Hameln which was selected some years ago for its comparative hardiness and willingness to flower. So if you are unsure about your conditions this might be the one to try first. The picture below is of Pennnsietum Hameln in our Decennium border in full flower on a dewy September morning and then much later in the year when the foliage achieved quite a spectacular warm butter yellow. 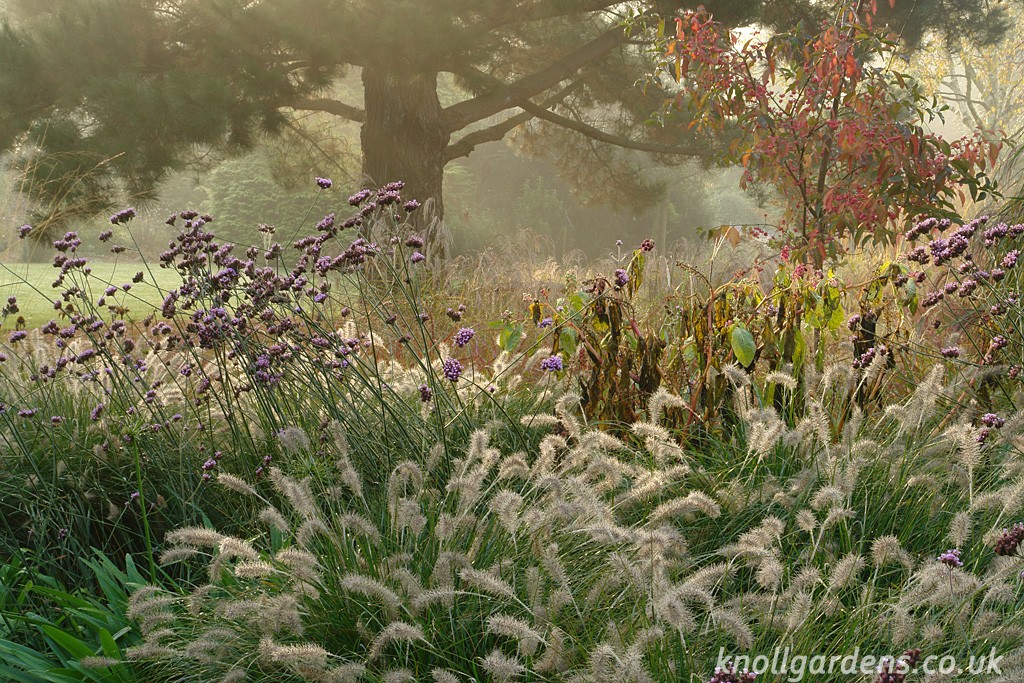 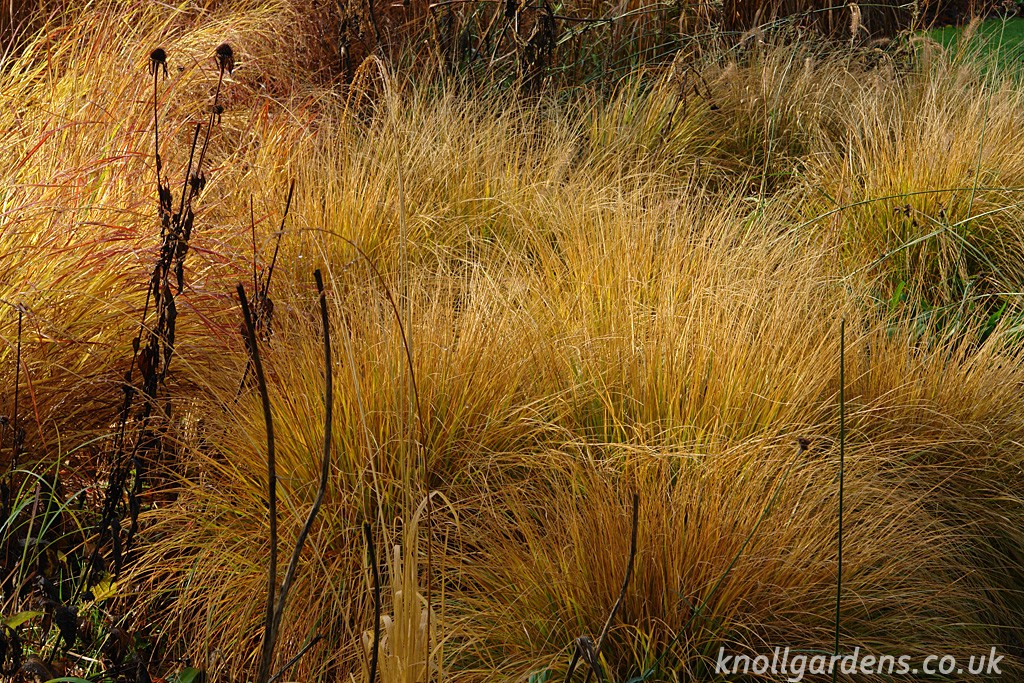 For a rather different effect I love Pennisetum Fairy Tails which is reasonably different from the previous fountains in that it is comparatively upright in habit but with the flowers gently drooping to create such a graceful outline. I always take the opportunity to use it where I can and in the picture below it is looking so graceful in our newly planted extension to our Gravel Garden. 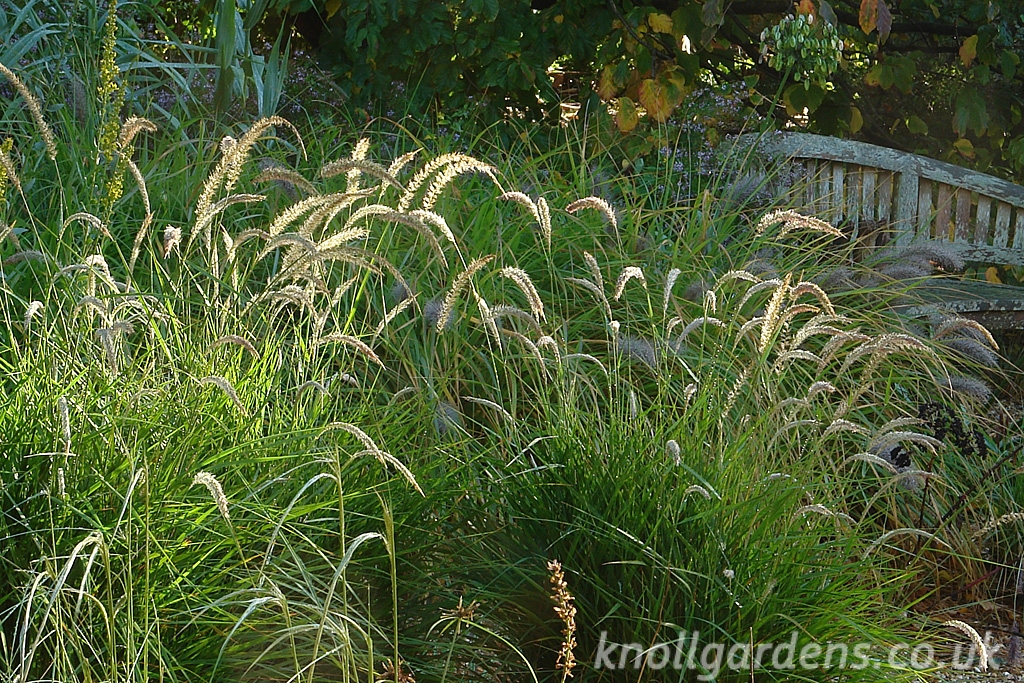 Pennisetum orientale is a wonderful ornamental grass popular for its pinky flowers but can be one of the less robust to grow in many gardens. Luckily there are several variations including Pennisetum Karley Rose and Pennisetum Shogun (picture below), both of which have wonderful pink flowers produced en masse on healthy plants. Both are great and in particular Shogun can have a bluish tinge to the foliage whereas Karley Rose is always a lighter green. 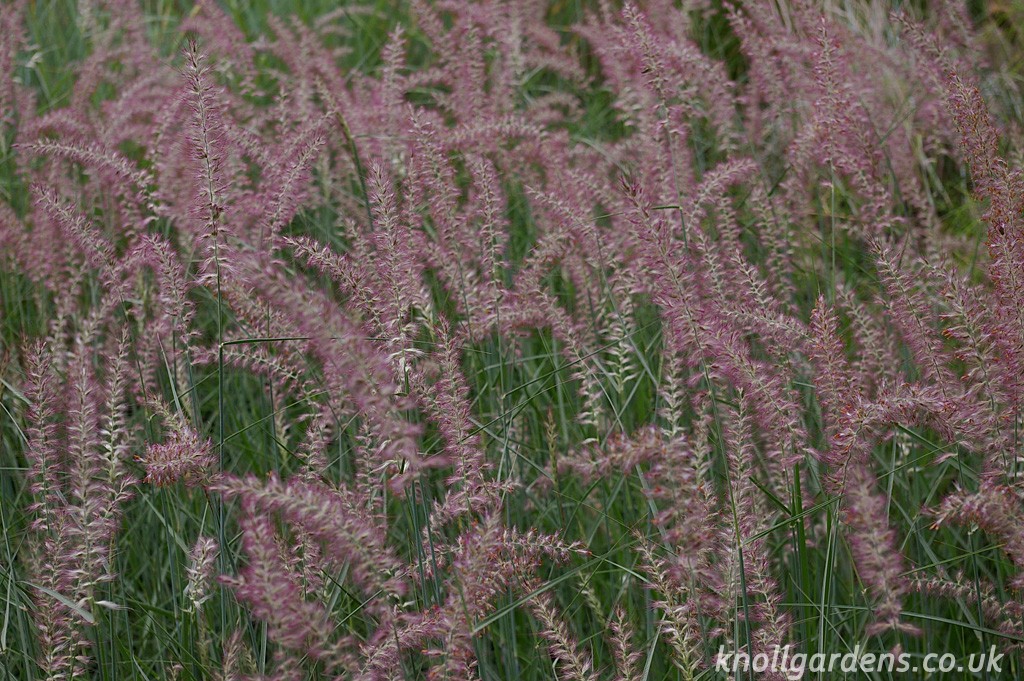 Rather different again in flower shape and overall outline is Pennisetum macrourum. As you can see from the picture below, taken at RHS Garden Wisley, this fountain has very narrow cylindrical almost ‘sparkler’ like flowers that shoot upwards and outwards rather like a miniature firework display. 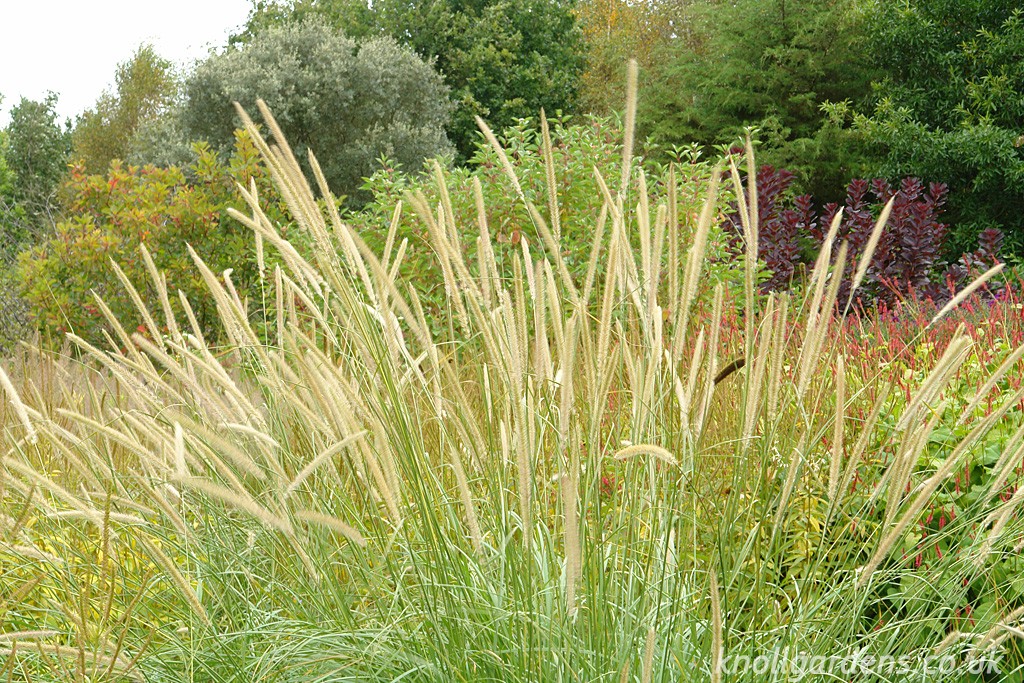 It is one of the largest of the fountains and can vary in height quite markedly depending on the form. I have seem some beautiful specimens at well over 2 metres. This does need a good summer to flower well, is a vigorous grower, and can spread to make quite large clumps.
Pennisetum Short Stuff, as its name might suggest, is a much shorter more compact selection that we introduced a few years ago which flowers regularly in our climate and does not have the same enthusiastic vigour as its parent plant; producing rather neat clumps of flower and foliage. It is doing great in our Dragon Garden. 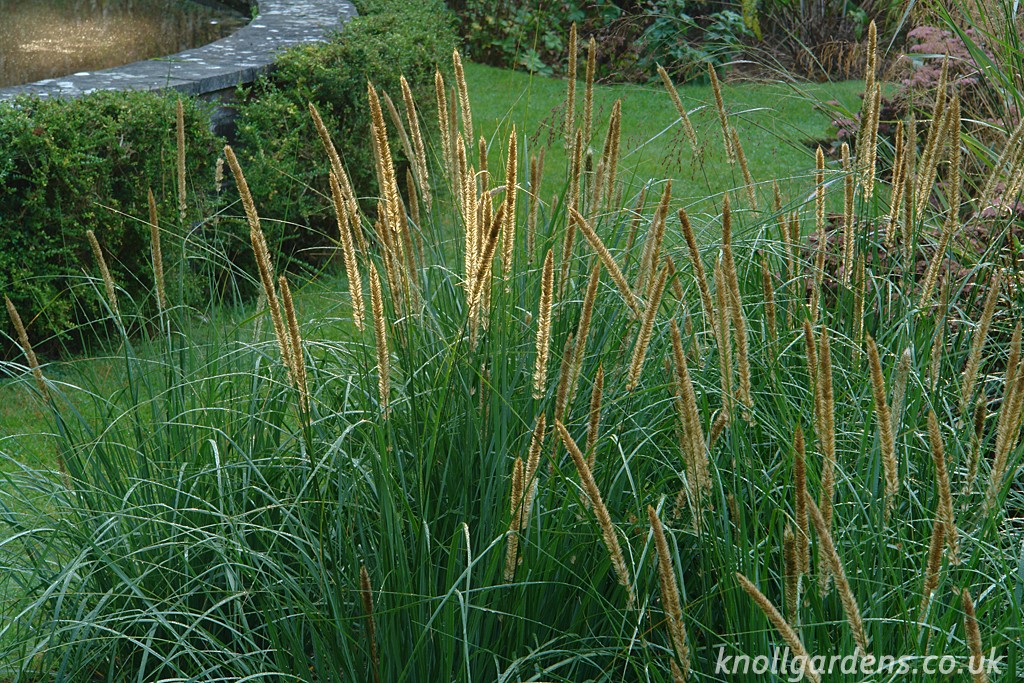 These are just a few of the magical fountain grasses that we can grow but I guess I really should mention the purple fountain grass, Pennisetum Rubrum, which is quite stunning in its all reddish/purple ensemble of stem leaf and flower. It is truly a wonderful ornamental grass but is an example of an exotic species that is just not hardy here in the UK. While it is a true perennial it has to be treated as a bedding annual unless you can overwinter it successfully in a conservatory or glasshouse (its needs around a minimum temp of 10’c and good light), and then it is quite simply a superb grass to grow for summer effect. If only we could produce a hardy version….! 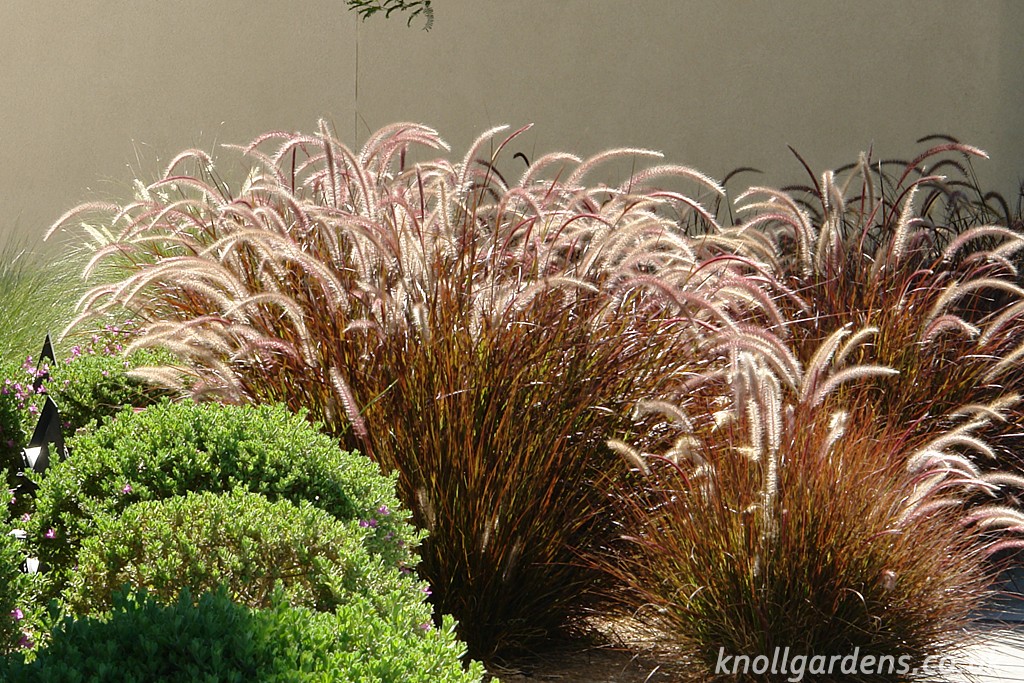