From the Experts @Knoll: New Plant Planning – Wednesday 20th May 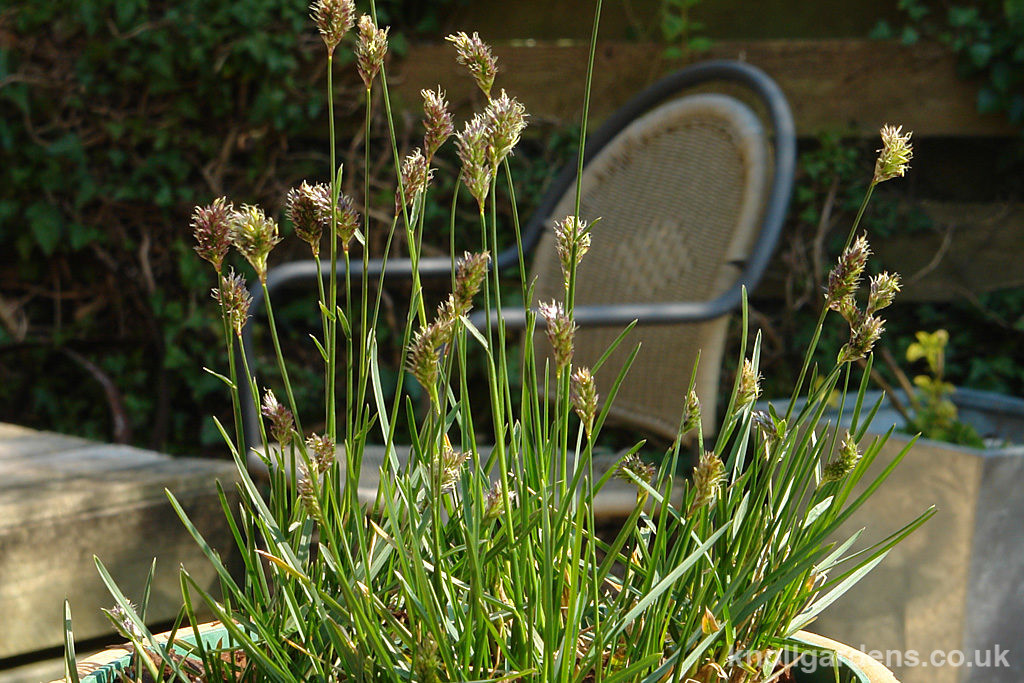 In April Knoll Gardens was delighted to launch Sesleria Spring Dream (above image), a compact, durable plant with slow growing blueish green foliage and attractive dainty looking flowers.  First spotted as a seedling at the nursery, it is one of 4 new plant launches the nursery will make this year.

The next 3 are still a carefully guarded secret, but we invited Neil Lucas to give us a peek behind the scenes and tell us what is involved in selecting and developing new plants.

Does Knoll Gardens have a breeding programme?  If not how do you identify plants to develop?

No breeding programme in so far as we do not set out (or have the time!), to create new plants. But we have developed sharp eyesight so we can spot a plant that looks different from its fellows in some way, which is the first stage of selection. We then pot that plant on in our trial area and watch it for a while; this can frequently be several seasons over which we try and gain some insight into the plant’s behaviour. If it looks promising (and most in terms of % fail to get this far), we might then plant some out in the garden to see how it performs. 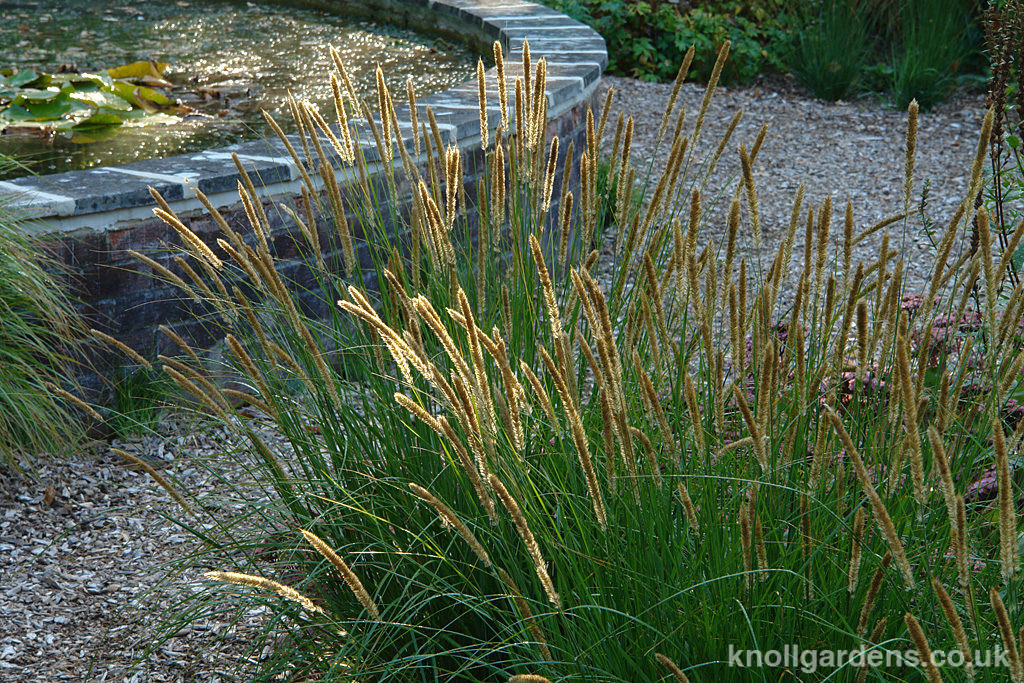 Another Knoll Gardens selection, Pennisetum Short Stuff (image above), was first seen  in amongst a batch of Pennisetum macrourum and was selected for its compact free flowering habit.

What are the development timescales that you would normally work to, do these vary greatly between varieties, and if so, why?

We are keen only to introduce new plants that have some distinct reason for their selection and will grow well in our gardens. So we have learnt to be quite strict in our choices and to take as much time as is needed to learn about the plant in question. This frequently takes 10 years or more; it is not a quick process but we hope our selections will stand the test of time and become good garden plants for the UK.

How do you name new plants?  What is the etiquette involved?

There is no formal process for naming a new plant, at least for our ranges, so it comes down to a name that we feel is appropriate. Obviously it is sensible to avoid using names that have already been used elsewhere, or sound similar to existing selections.

Miscanthus Cindy (image below), is a Knoll Gardens selection that was was first spotted as a seedling in Neils private garden many years ago. 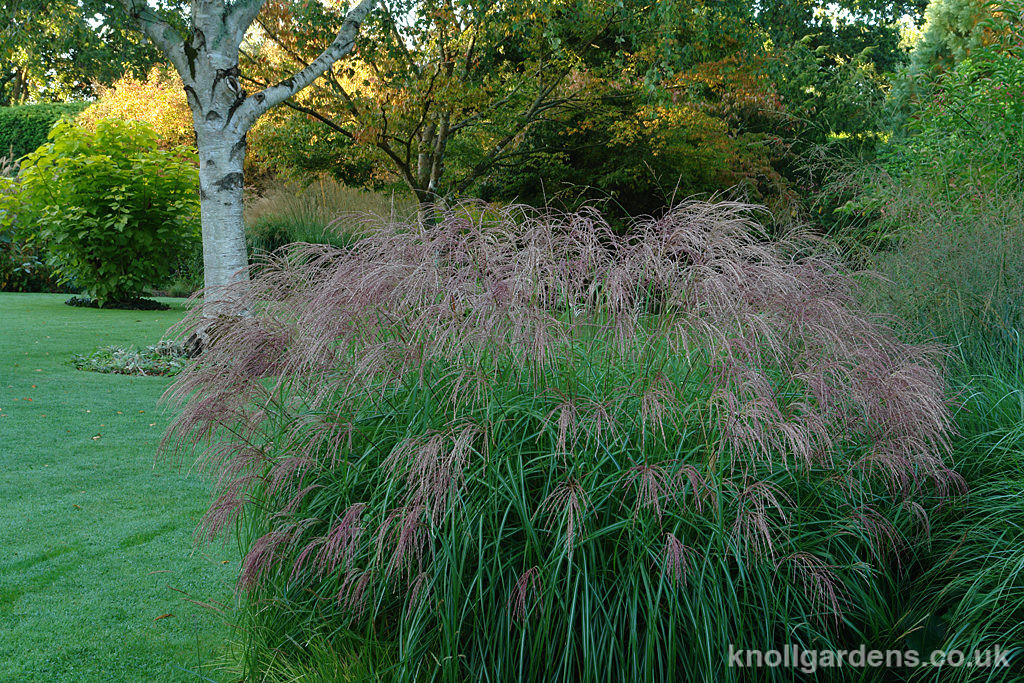 Talk us through the first launch of this year, Sesleria Spring Dream, how was it identified and bred, what situation, soil type and setting is it best suited to, and what would it partner well with?

We first noticed this plant on the nursery some years back as it was a little taller and more free flowering than our existing forms of Sesleria caerulea. Following our normal practice we made several selections and refined our choices again for several seasons as it become more clear that this was something a little different and perhaps worth naming. Once we made the decision that it was a good plant it then took another few seasons to make enough stock to be able to offer it for sale.

Sesleria Spring Dream is a low mounding plant that would work in a number of different positions such as a specimen in a gravel garden or in a container or trough. As with many plants it would be most effective in borders when used in informal drifts towards the front of a planting. Sanguisorba Tanna, Nepeta Walkers Low or Salvia Caradonna make good partners. Although it will take a small amount of shade it will be happiest in a sunny open position where the soil is not too wet. 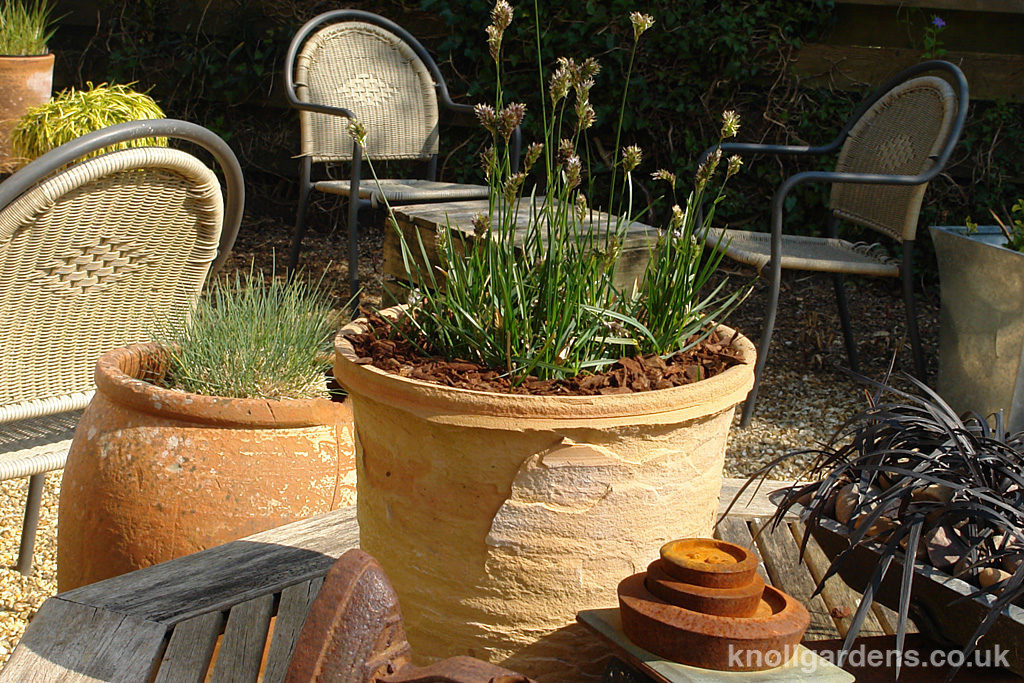 Sesleria Spring Dream (above), is great for pots and containers.