Purple moor grasses are botanically all forms of Molinia caerulea and, as the common name might suggest, these native grasses are often found on open grassy spaces such as commons and heathlands, sometimes in patches, sometimes covering acres of ground and in association with heathers, pines, gorse and silver birch.
Although when in its native habitat these moor grasses might often pass casual notice, when used in our gardens they become a wonderful ornamental grass that is almost impossible to ignore from summer onwards.

From a gardeners view point there are two basic types of molinia. Molinia caerulea grows to about 1 metre in height or a little less whereas the tall purple moor grass, Molinia caerulea aurundinacea (wonderful name!), grows to 2 metres or thereabouts. There are many garden cultivars of both forms of moor grass but all fit within this basic distinction. So for example the picture above taken in my garden at Knoll is of Molinia Skyracer, which is a cultivar of the tall moor grass whereas the picture below, also taken in my garden, is of Molinia Poul Petersen a cultivar of the shorter purple moor grass. 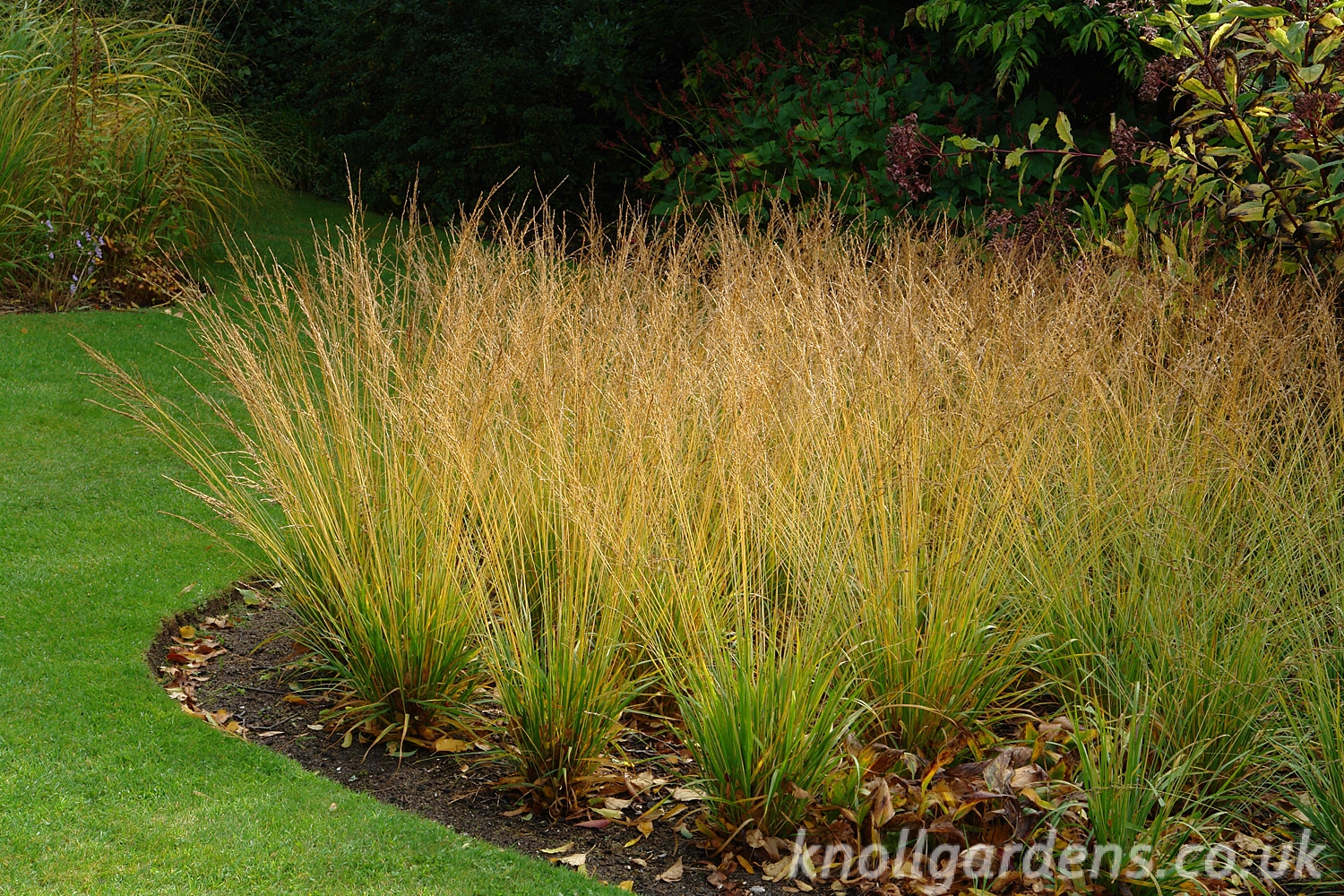 Both forms make wonderful ornamental grasses for our gardens. They are mound forming plants that produce masses of tiny fragile looking flowerstems in summer that are at first so delicate they are almost invisible. But in fact this is what creates their unique character and undeniable charm. The shorter moor grasses produce simply masses of these stems that together form a floating sea of flower and movement. While the taller forms might produce a lesser number of stems these have a ‘see through’ transparent quality that is unrivalled by just about any other plant. With such striking ornamental qualities both forms are invaluable ornamental grasses to use in our gardens.
The flowers themselves are actually quite a dark purple for a short time when fresh but quickly start to fade to their trademark beige and browns.The picture below shows the same group of Molinia Poul Petersen when in fresh flower earlier in the summer. 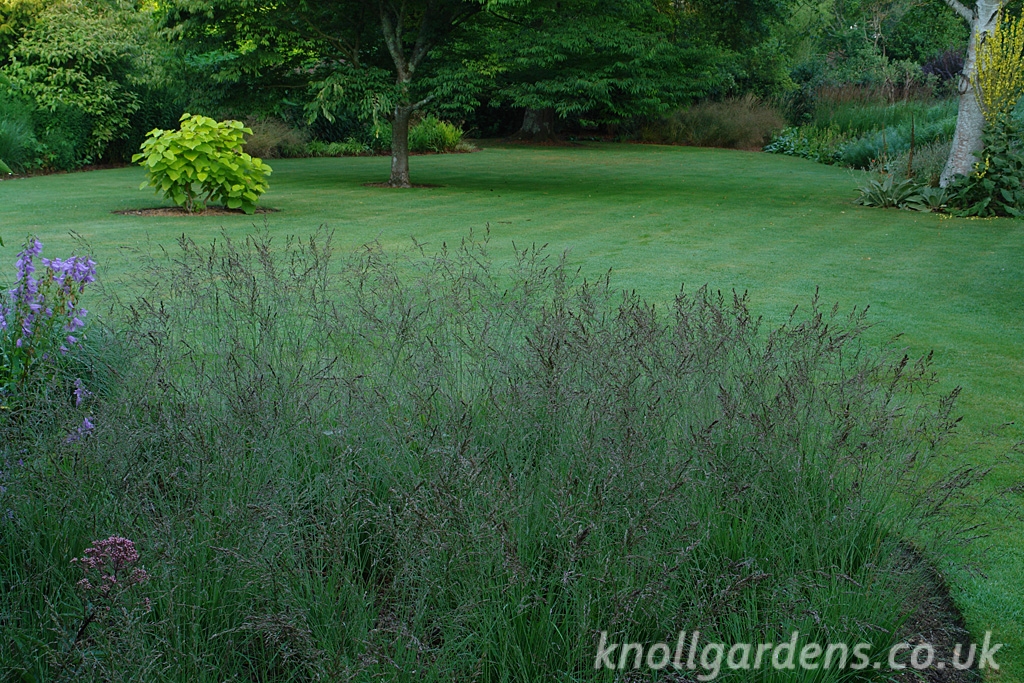 Beautiful as this flower is the molinias are probably at their resplendent best as summer turns into autumn and their foliage turns a warm butter yellow. This starts slowly at first; working down from the tips of the flowers until the whole plant literally seems to shine the warmest of yellows. At this point they are probably the most commented on plant in the entire garden.

Molinias like sun though will tolerate a small amount of open shade and while coming from often wet and even boggy areas in nature will cope with a variety of soils probably being least happy in very dry, drought prone conditions. Our soil at Knoll is very sandy and frequently dry at times, but they perform beautifully as long as we mulch the borders which we are always very keen to do. Being deciduous they need cutting back in the spring ready for the new season though many will collapse under their own weight by around February time so all that is needed is a quick tidy in the spring. We tend to suggest for Molinia caerulea 3 to 5 per square metre and for the taller Molinia arundinacea types 1 to 3 per square metre.

The shorter moor grass, Molinia caerulea, is itself very beautiful and has given rise to several cultivars of which Molinia Poul Petersen, Molinia Edith Dudszus and Molinia Dauerstrahl are especially good.
Of the taller moor grass, Molinia arundinacea, Molinia Karl Foerster (see picture below), Molinia Windsaule and our own introduction, Molinia Breeze, are all excellent forms but in truth you will be delighted with any of these magnificent moor grasses. 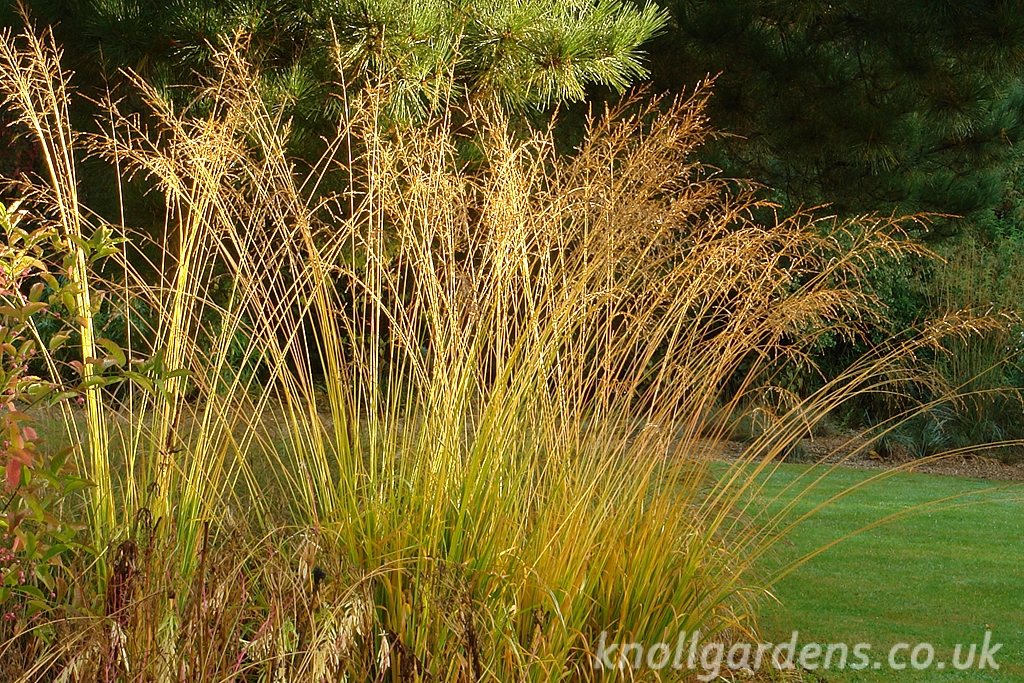