The Nursery and Garden are open to onsite visitors Tuesday to Saturday 10am to 4pm. Wearing a mask is now optional but we encourage the use of masks within the buildings.

Miscanthus Starlight is possibly the most compact free flowering miscanthus so far available and was released by Knoll Gardens in 2012 as part of our long running selection programme aimed at providing UK gardeners with a range of quality ornamental grasses that perform consistently well in our varied UK climate.

Miscanthus StarlightStarlight is a selection from the Yakushima Dwarf group of miscanthus that were introduced into this country some years back as a group of hybrids which, while all dwarf in some respects, varied quite significantly between each other while still being known collectively as Miscanthus Yakushima (Yaku) Dwarf. This has led to some confusion over a period of time which is why Knoll Gardens decided to try and identify some of the more distinct forms and give them individual cultivar names. Miscanthus Abundance is another form given cultivar status by us a few years back as a result of our selection programme which is rather larger than Starlight but with the same abundance of flower (for which it was named) and overall compact habit. Miscanthus Elfin, also named by us, is somewhere between the two with a noticeable reddish flower stem.

Miscanthus Little Kitten is another good compact form, though not selected by us, possibly a little taller than Starlight but paler flowers initially and a less silvered foliage effect. 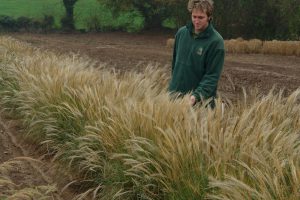 y of the Miscanthus Yaku Dwarf strains make good ornamental grasses for the garden but we are especially pleased to have been able to select and name some with more distinctive characteristics such as Starlight which has a wonderful rounded shape, comparatively silvered foliage and masses of flowers that are as effective in the winter as they are when freshly produced in high summer. With a high wow factor and easy going nature Miscanthus Starlight is excellent in most garden situations; as an individual specimen in small gardens or as a massed drift in larger spaces it performs well in a variety of soils and while preferring sunny open positions to flower best, is even tolerant of a small amount of shade. Being deciduous simply cut down the plant to the base each spring, either leaving the old stems on the soil as a mulch or removing to compost.There is no staking, deadheading or spraying needed!
Like so many ornamental grasses Miscanthus Starlight is easy to use, long lived and beautiful to look at…