Ornamental Grasses for the Modern Garden

For many gardeners a slight air of mystery can surround the use of ornamental grasses in gardens, but in fact they are so very easy to use and are really no different in principal from most perennial plants. While the great majority ornamental grasses prefer open sunny conditions, there are also those that will tolerate dry shade and other difficult to plant situations such as wet soils and even pondsides.

Strongly architectural, they work extremely well en masse but are just as happy in mixed plantings, whether with perennials or woody plants, and need little in the way of aftercare once established. More ‘wow’ with less work is a practical maxim for gardening with ornamental grasses.
As most of the ‘wow’ factor deciduous grasses come into their own from high summer onwards they are almost uniquely placed to carry the scene right though what can otherwise be a rather barren period in gardens.

Combined with many autumn colouring woody plants, the ornamental grasses in my own garden at Knoll in Dorset, (which is open most of the year), help create a peak of interest from high summer right through until late autumn, though interest continues right up to Christmas and deep into winter.

All of the main groups of deciduous ornamental grasses can provide showstopping impact such as miscanthus, pennisetum, panicum, calamagrostis and molinia. For example Miscanthus ‘Ferner Osten’ at about 2metres has fast growing mounds of gently cascading foliage during the earlier part of the season to be followed by masses of dark red flowers that gradually fade to beige; all the while with amazing textural qualities that last far longer than the initial flush of fresh colour. It is just one of many good garden cultivars that reach a peak of performance with the onset of autumn. Miscanthus ‘Flamingo’is a similar height and every bit as good and effective in the garden but with deep bright pink pendulous flowers.

Panicums are a personal favourite ornamental grass. Being a little shorter than the taller miscanthus and so suitable for smaller areas, their generally upright habit and soft leaves which can turn incredible colours in the autumn have spikes of tiny flowers so enthusiastically produced that more solid perennial flowers such as echinacea planted nearby appear to be floating on the cloud like masses of flower.

Panicum ‘Heavy Metal’ is well named for its stems leaves and flowers, all of which have a quite tall (1.5m), upright habit, are of a uniform powder blue grey that is so effective with such a wide range of perennials and I enjoy a line of these grasses adjoining groups of Eupatorium maculatum Atropurpureum and Veronicastrum virginicum. Well known for its beautiful dark purplish red autumn foliage and masses of tiny dark flowers is Panicum ‘Warrior’ (1.2m), while a still new cultivar Panicum ‘Northwind’ (1.2m+), provides a strongly upright accent that is very effective in borders or containers, flowers well, and has really warm brown autumnal tones.

Fountain grasses (Pennisetum), are fabulous ornamental grasses that provide masses of flower at a lower height of generally less than 1metre where their fluffy caterpillar like flowers reflect the slightest amount of morning or afternoon sunshine. This backlit effect is simple to achieve with most of the ornamental grasses by simply planting them where the sun will be seen coming from behind the flowers. The effect is magical and so easy to do; we can forget that sunshine and the angle of the light plays an important part in how we see our plants and enjoy our gardens. Pennisetum ‘Fairy Tails’ is new and rather exciting, with freely produced strongly upright tail like flowers it is really brilliant at providing a sort of informal garden hedge or screen that needs no summer maintenence and provides masse sof flower into the bargain! Pennisetum ‘Red Head’ is a recently introduced unrivalled must have with large initially red flowers that quickly turn to smoky grey-black. 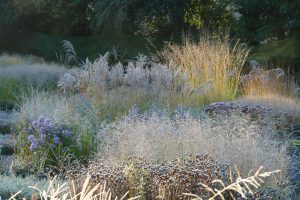 Found in most gardens dry shade is amongst the most difficult of conditions to plant successfully but even here ornamental grasses offer several easy care options. Anemanthele lessoniana can cope with the driest shade amongst the roots of trees and shrubs and is as beautiful as it is effective. Where conditions are a little less severe the hakone grass, in either the green form Hakonechloa macra or the yellow variegated version Hakonechloa ‘Aureola’, provides elegant mounds of narrow lance shaped leaves that can turn bare dry ground into an oasis of cool.

Easy to use and easy to please; there really is almost an ornamental grass for every garden situation!