This summer has again been rather different from what we had come to expect in our dry corner of Dorset. As with last summer, the lack of sun has not been overly welcome, but the increased rainfall has not been all bad in that many of our plants, like some of the big trees and shrubs, have welcomed the respite from the usual drought conditions they have to contend with.

Our National Collection of Pennisetum, or Fountain grasses to give them their common name, revel in sunny, hot, well drained situations. For example, in the Mill End borders we have added a group of the very new Pennisetum ‘Red Head’ with its huge, initially red, then almost black flowers that are quite stunning. In the Decennium Border Pennisetum ‘Hameln’, has made wonderful dark green mounds of foliage now topped with its fluffy catkin like heads of flower which it will hold for most of the winter. 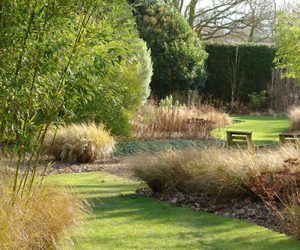 The Gravel Garden has been extended and recently planted with many new plants that will tolerate or even enjoy the sun baked and often drought prone conditions in this particularly dry part of the garden. Pennisetum, panicum, salvia, persicaria and jarava are just some of the many plants that have found a new home here.
Stipa gigantea ‘Gold Fontaene’ is the striking grass to one end of the gravel that sends up tall spikes of beautiful oat-like heads of flower which last nearly all year. Though a little shorter than usual due to the earlier low light levels, we are especially pleased with this form which is as uncommon as it is beautiful.

Although the Holly Walk, which now borders the new gravel extension, gets quite a bit of sun the increasing bulk of the surrounding shrubs and their roots make this area increasingly dry and difficult for most plants. However the pheasant grass, Anemanthele lessoniana (also known as Stipa arundinacea), is an evergreen that tolerates both dry sun and shade very well. The combination of the flower and its ever changing foliage colour would grace any garden scene. 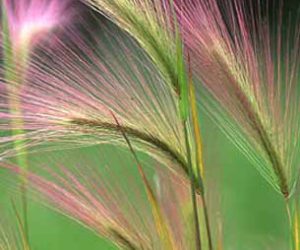 The Decennium Border was planted just over seven years ago as a replacement for old conifers which had passed their ‘fell by’ date. The border is designed to have several peaks of interest as the season progresses, all from permanent planting without the need to keep adding more plants. There are many lovely plants timed to be at their best from now onwards, including the amazing Joe Pye Weed or Eupatorium atropurpureum contrasting its pinky purple flat heads beautifully with several miscanthus including ‘Flamingo’ and ‘Ferner Osten’. I particularly love the Panicum ‘Heavy Metal’, its grey blue foliage topped with clouds of dark pinky purple flowers weaving its way between the miscanthus and the Joe Pye Weed.

Along the Mill End borders we removed the wide turf path replacing it with a sinuous bark surface which, at the same time as reducing maintenance, allows much more room for the new plants we wanted to use in this area. It is now easy to enjoy the plants at close quarters, and we have already recorded over 20 different butterflies in this area with the flat pinkish heads of Eupatorium lindleyanum and the narrow red upright flowers of Persicaria being especially sought after. The striking strongly upright grass close to the path is Panicum North Wind which makes a wonderful vertical accent in any planting.