Most people would agree (usually from experience!), that shade and especially dry shade is about the most difficult condition to plant successfully in our gardens. Of course there are many degrees of shade from the relatively minor shade cast by a north wall or fence to the deep shade cast by mature trees both broadleaf and evergreen.

A border which is north facing for example may not get direct sunlight but it is generally open and so more grasses can be found (such as Deschampsia cespitosa, Molinia caerulea and Miscanthus Starlight), that will grow in this kind of shade than that found under an established beech tree whose tenacious root system will dry out the soil and any smaller plant growing within its reach. This in fact is the major problem of dry shade; in that while there may be adequate moisture during the winter and early spring, once the mature woody trees or shrubs break into growth they take all the available moisture leaving nothing for any plants with smaller root systems. There are always plants which, like the spring flowering bulbs, complete their cycle of growth and flower early in the season and then sit quietly or even die back once the ground starts to dry out.

As always it is important to choose the right plants for your gardens conditions and there are certainly some grasses and grass allies, the sedges and wood sedges, that will cope happily with varying degrees of dry shade in the garden. Have a look at the Plant Selector on the Home and Shop pages choosing the ‘Dry Shade from the drop down selection.’

A true grass and one of the most popular, as it is so effective, is the recently renamed Anemanthele lessoniana (also known to its friends by the slightly more pronounceable name of Stipa arundinacea), the Pheasant Tail grass. It is fabulous in dry sunny conditions but it is also amazingly effective in dry shade though it will not be happy in wet soils. It forms evergreen mounds of multicoloured foliage that gradually turn through a mixture of greens, browns, orange, red and gold as the mood takes it. It can also produce an amazing amount of flower in summer. the individually tiny pink flowers being produced in such quantities that they almost obscure the rest of the plant. While it will grow even in quite deep shade it will not reliably produce flower in the same way. Pheasant Tails will grow quickly but it is relatively short lived, lasting around five years or so depending on the conditions and is one of the few grasses that does not react well to being split or otherwise moved around. 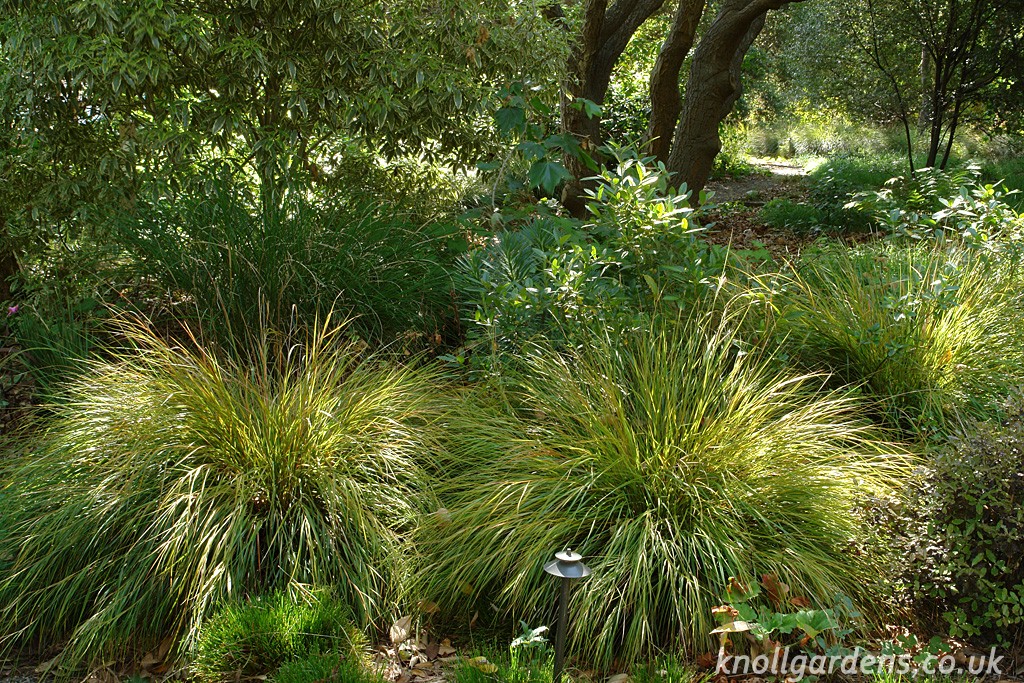 Carex Ice Dance on the other hand may not have the easy movement and multicoloured foliage of the Pheasant Tail but its softly variegated leaves are produced on tough mat forming mounds that are almost indestructible! It has been described, rather aptly, as self repairing groundcover which is a use at which it excels. Apart from growing in my sandy soil under some well established shrubs I also have a pot or two growing in the shade of other plants, it seems to be entirely unconcerned with its position, is growing happily and looks great! 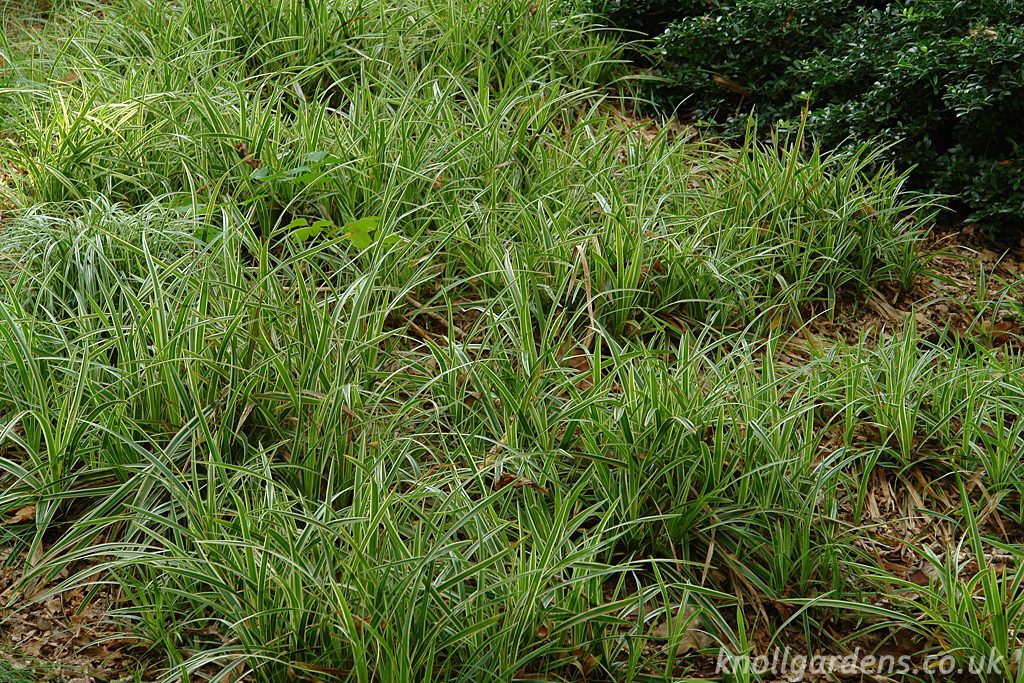 Carex Ice Dance is possibly my number one choice for the toughest of dry shade but there are also the woodsedges such as Luzula sylvatica Marginata that will cope with both wet and dry shade. Possibly less beautiful individually than the first two, this is a very long lasting matt forming plant that can cope with almost any variation of shade. 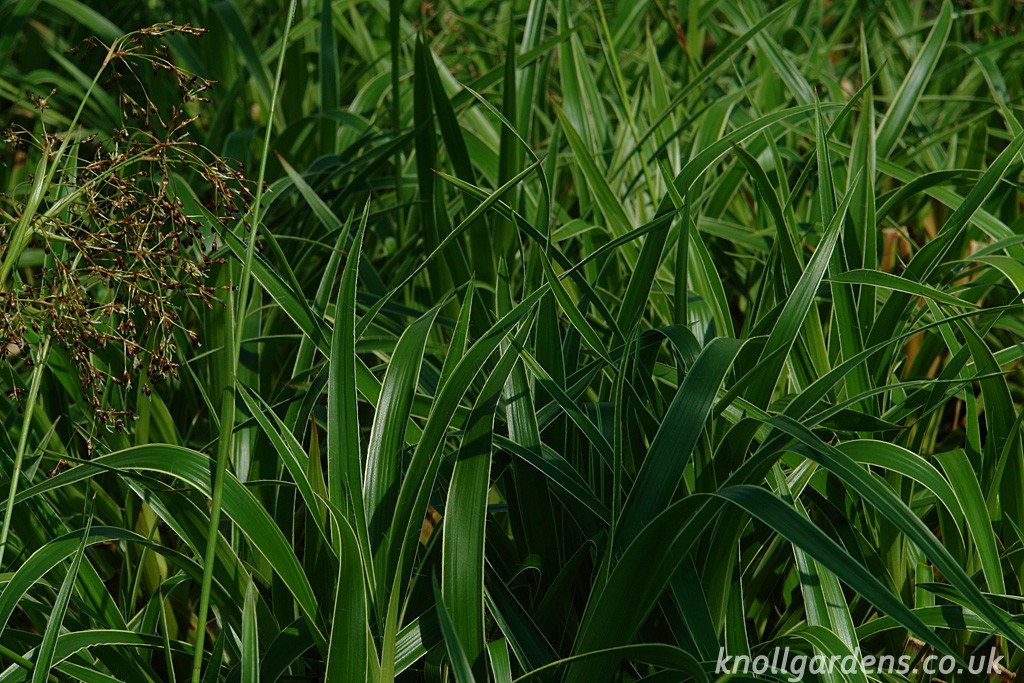 Rather more attractive than its cousin, and mound forming, is Luzula nivea which produces its striking flowerheads in early summer in various shades of white and cream. It is happy in wet or dry shade but wont cope with really dry areas immediately under large trees. Although it has its wonderful white flowers it is actually named for its rosettes of evergreen foliage that are often covered in fairly dense white hairs. It can get untidy after flowering so a good trim back at this time encourages it to produce a new sheaf of fresh green leaves. 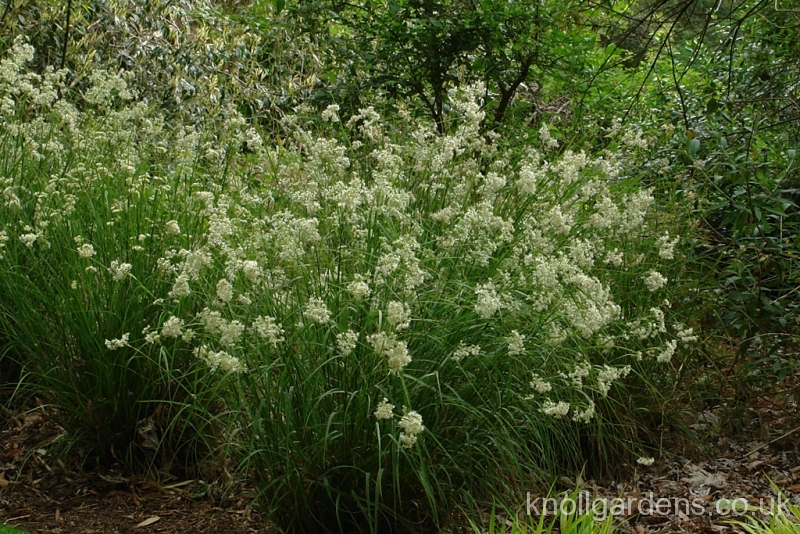 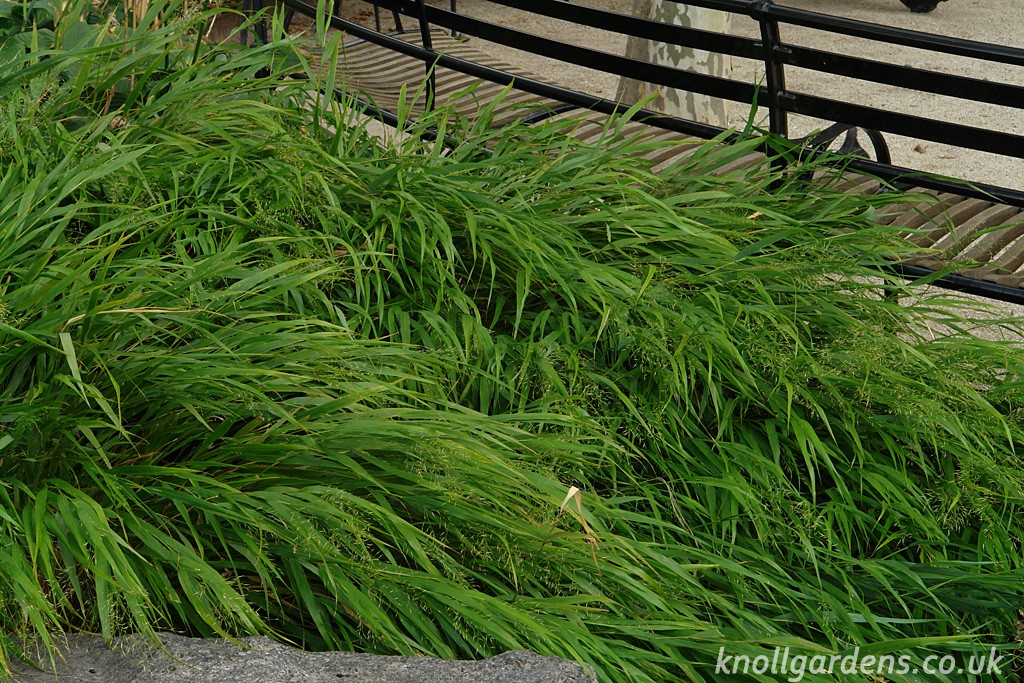 The hakone grasses offer mounds of very refined narrow foliage in a variety of colours that will cope with a fair amount of dry shade though not to the extent of the toughest sedges. Hakonechloa macra is wonderful, especially en masse, as is the delicately variegated Hakonechloa Aureola which can be a bright brassy yellow in sun or a more subdued chartreuse yellow in shade. 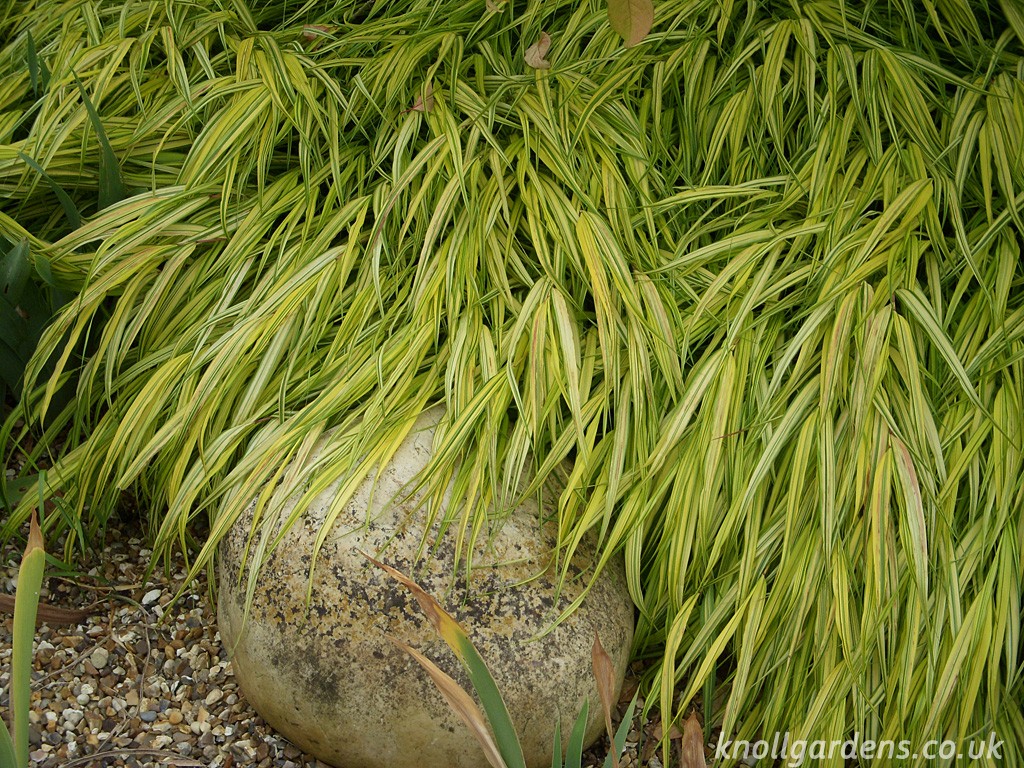 While any of these slow growing but long lived grasses are really wonderful easy care plants for containers in shady places possibly a real favourite is a relatively newish form Hakonechloa All Gold, which, as its name suggests, has all golden yellow foliage that is especially handsome in light shade.

Another true grass that is happy in sun or a reasonable amount of shade is Chasmanthium latifolium, the spangle grass. Upright wiry stems produce comparatively wide bright green leaves that are topped in high summer by rather distinctive flat heads of flowers. It can bring an airy lightness to shady corners. 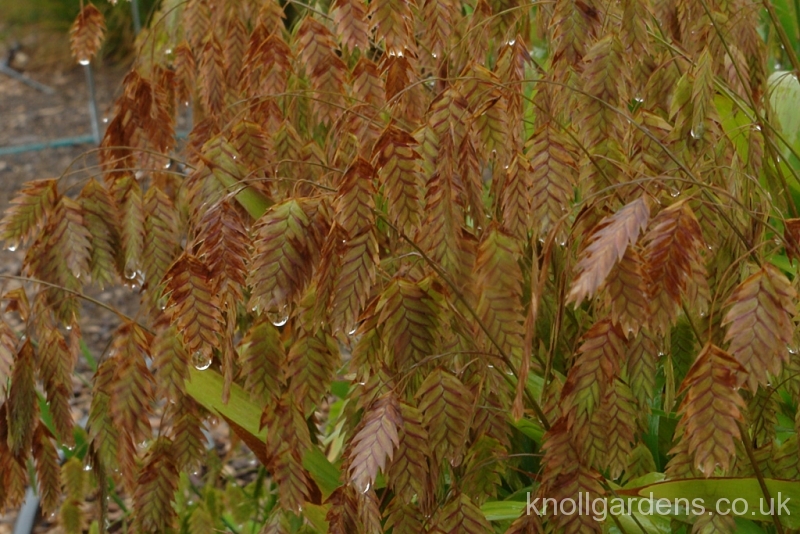