The Nursery and Garden are open to onsite visitors Tuesday to Saturday 10am to 4pm.

Mask wearing is now mandatory for use within the buildings.

Grasses have many qualities that make them such great plants for our gardens and possibly the one that I have come to enjoy as much as any other individual quality is their ability to reflect the sunshine; which provides us with some transitory, but quite fabulous ‘light shows’. 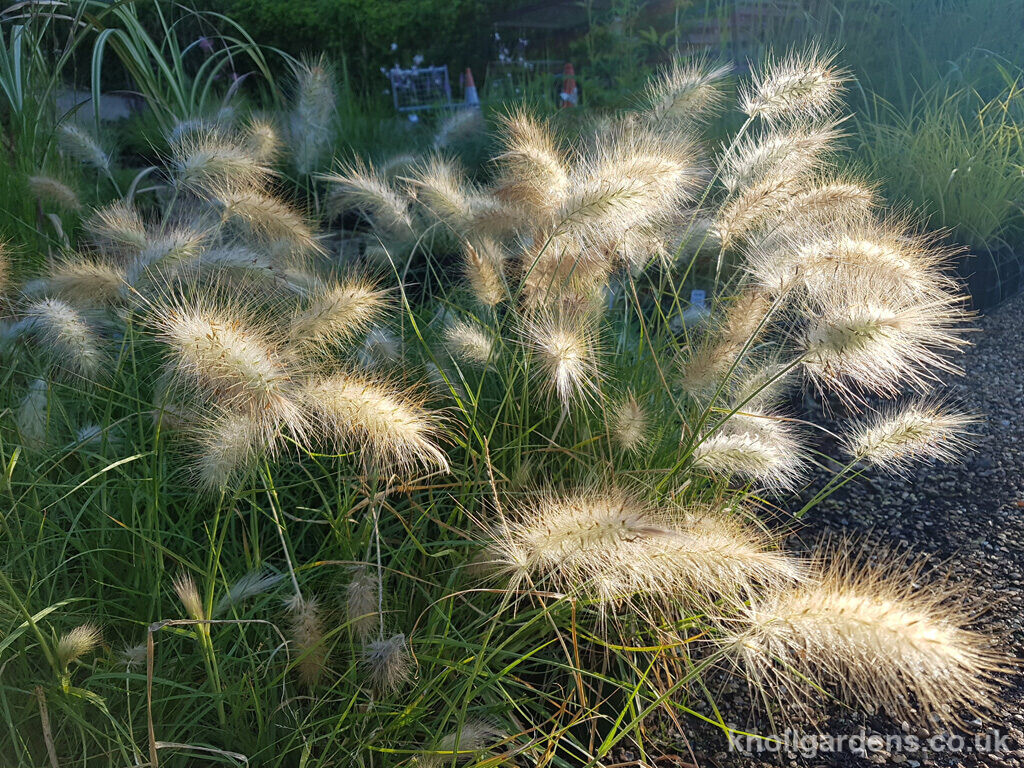 Not all grasses will do this of course but those that hold their flowers clear of the foliage can perform in this way if planted where you can view the grasses with the sun behind them; either in the morning or evening. Most of the main groups of deciduous flowering grasses such as miscanthus, panicum, deschampsia, calamagrostis, molinia and stipa will all provide these free light shows, especially come high summer and into autumn as the level of the sun lowers and the grasses are producing their flowers.

Even quite young plants will provide a show; such as the 2 litre sales plants of Pennisetum villosum (image above) on the nursery at the moment. These tactile and fluffy flowers are quite beautiful at any time but seem to take on a magical quality when caught with some early morning sunshine. 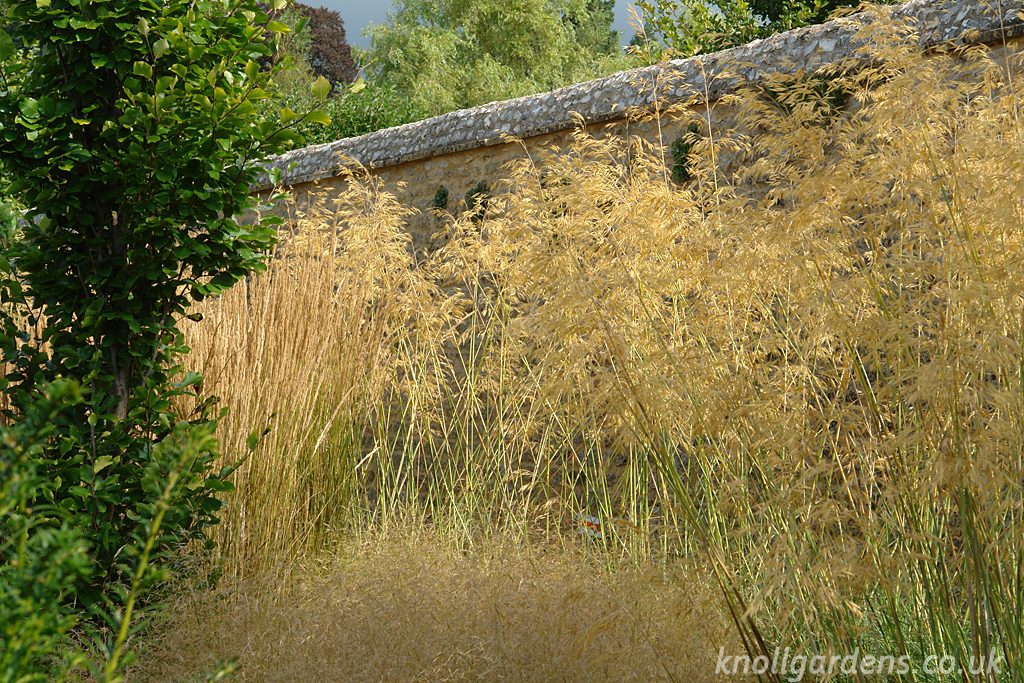 Towards the other end of the height scale from the pennisetum is the giant oat grass, Stipa gigantea (above), which as its name suggest produces quite magnificent heads of golden oat like flowers in late spring. As the flowers gradually dry through the season they are quite breathtaking when caught in some soft sunlight. 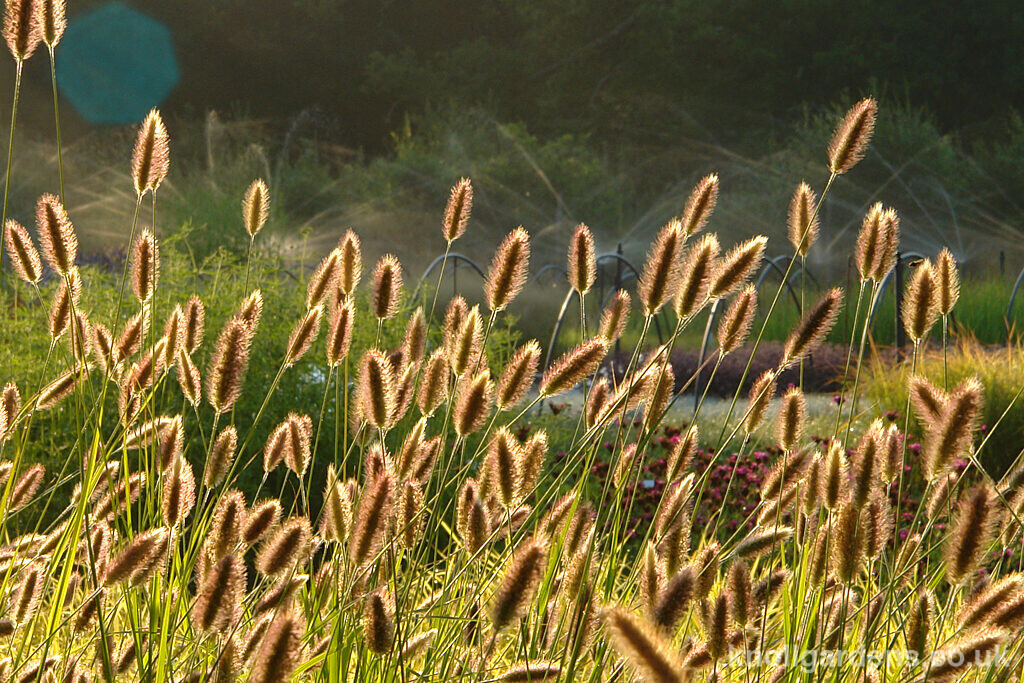 Pennisetum Red Buttons (above), is known for its wonderful ‘button like’ initially red flowers that are produced quite early in the season for a pennisetum. Like all the fountain grasses it needs sunny well drained conditions to do well. These plants in our growing field were literally seeming to dance in the sunshine. 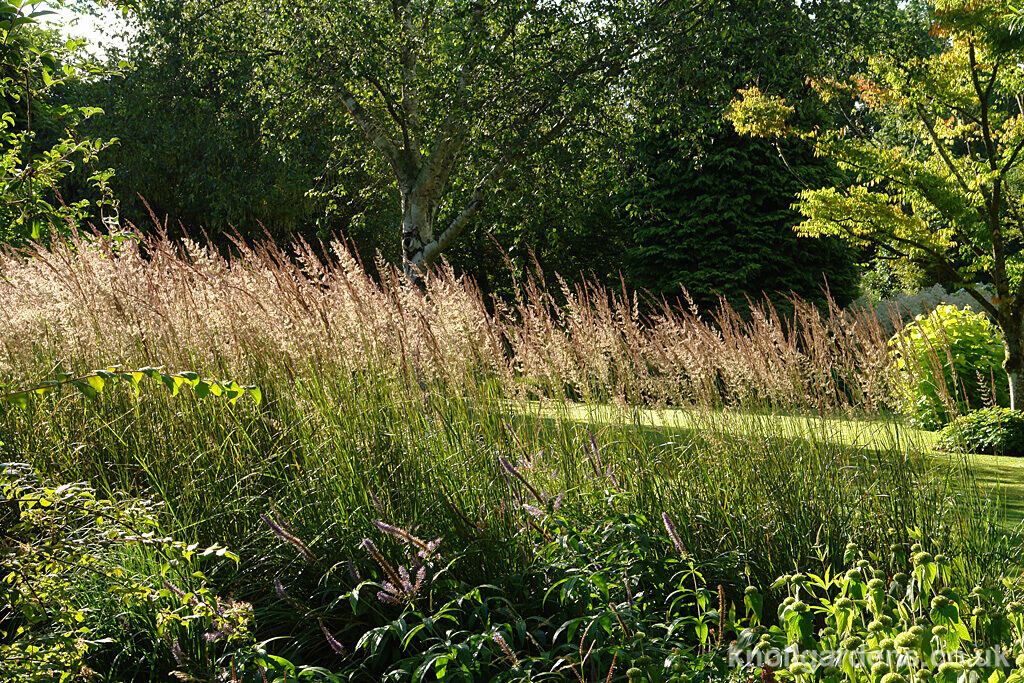 Often used as a screening grass  or informal hedge thanks to its distinctive upright habit, Calamagrostis Karl Foerster (above), is one of the first tall grasses to come into flower each year and when used in a linear style as here in our Decennium border its habit and the reflective quality of its flowers creates a most lovely effect.

All deschampsias, a UK native grass, produce individually tiny flowers but in such quantities that they create cloud like masses that are superb at catching and reflecting even the smallest glimmer of sunlight. There are various forms at different heights but the most compact is Deschampsia Goldtau (below), which never fails to delight. 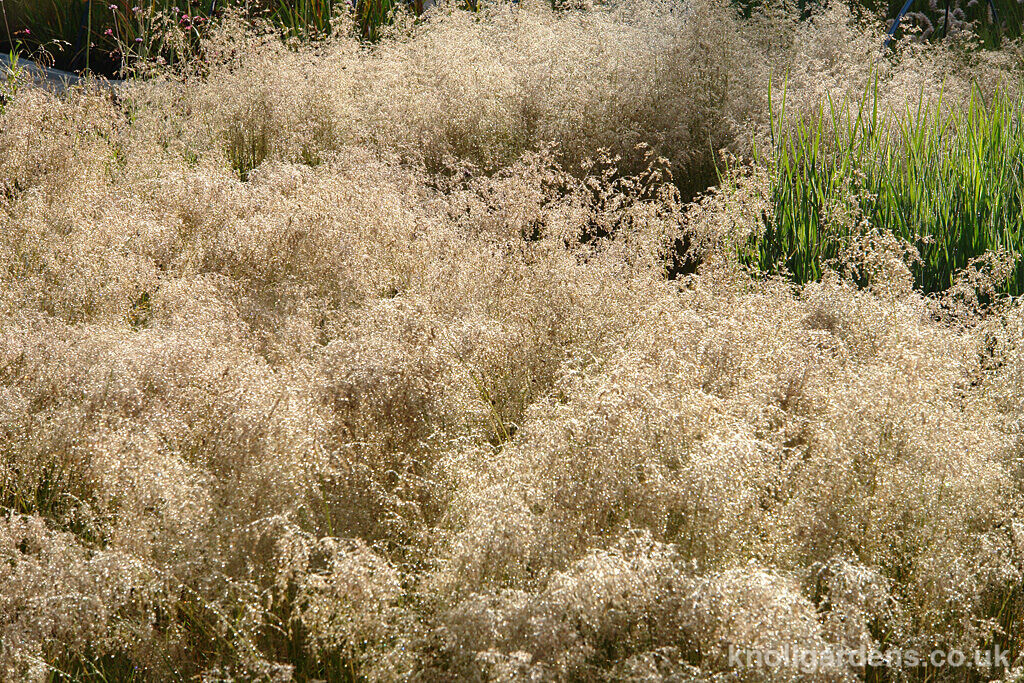 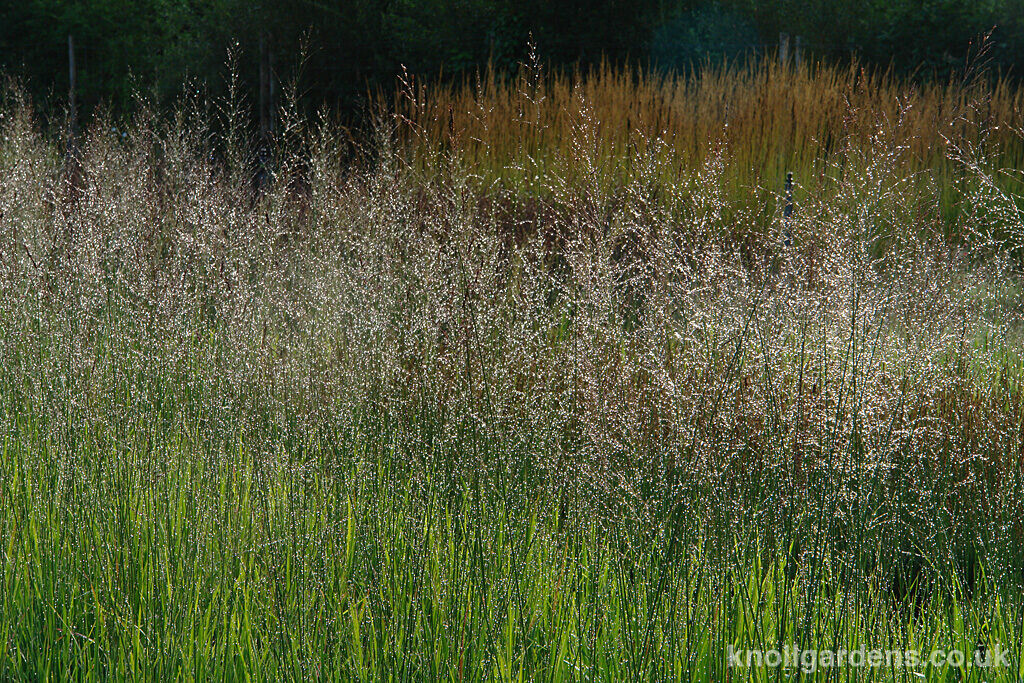 Molinia Bergfreund is one the tall moor grasses that come into their own from about now onwards. Initially very light and airy the stems and flowers are great at catching the sunlight and especially so when there are water droplets on the flowerstems as seen in the image above. 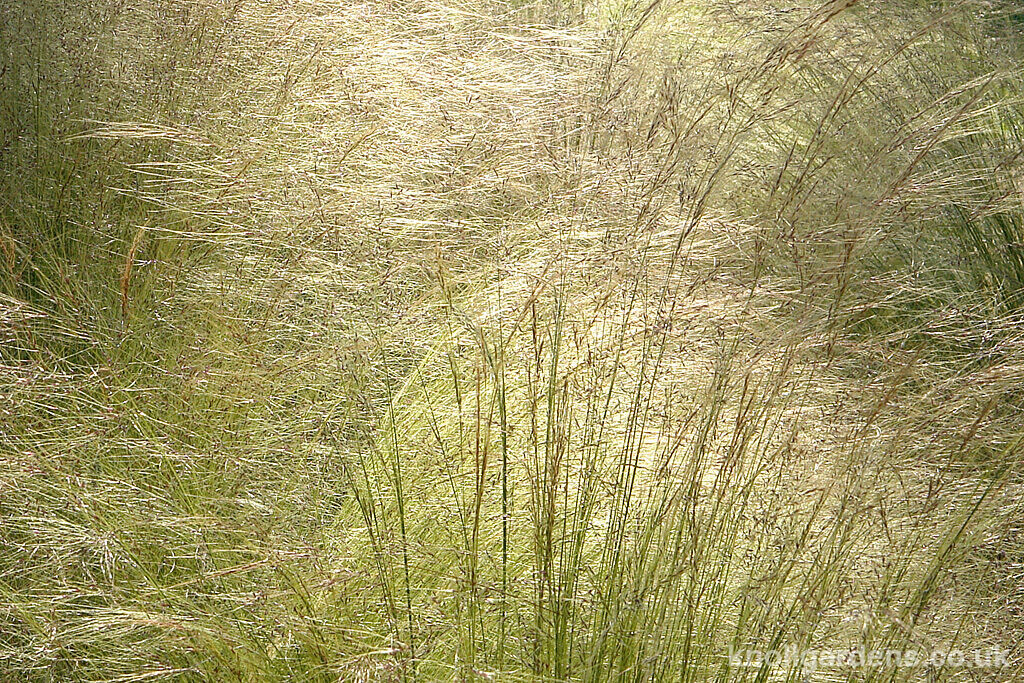 Nassella tenuissima (above), is one of the most popular grasses and it is easy to understand why. It is easy and quick to grow in sunny open positions, has beautiful narrow bright green foliage and enthusiastically produces its delicate flowers that move in the slightest breeze and are always ready to show off in some sunshine.

Deschampsia Schottland (below), has tallish flowers that are initially purple and like all the deschampsias are excellent at reflecting the sunlight. We have it in a fairly dry corner of the garden where it will catch the morning sunshine. 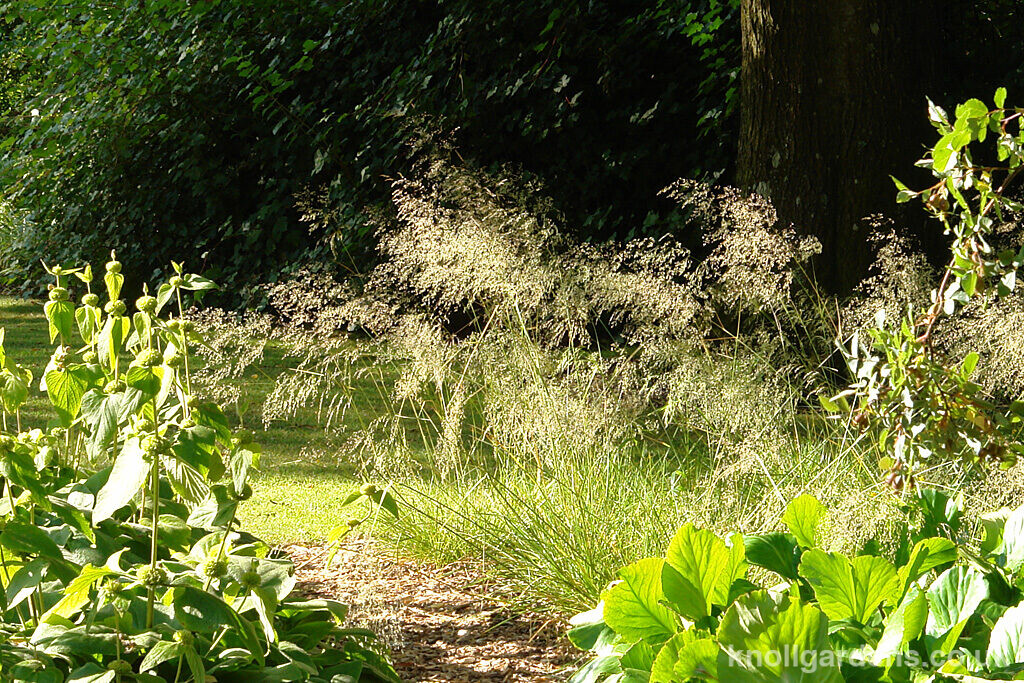