We are delighted that both the nursery and garden are now open from Tuesdays to Saturdays 10am - 5pm. No pre booking or appointment is required. We appreciate our customers following the current social distancing guidelines.

We continue to be very busy with mail order and current turnaround times are around 10-15 working days.

The Romance has gone; the Valentines Day storms

I shall long remember Valentines Day 2014 as the night the garden experienced the most serious amount of damage that I have seen in my 20 years of being at Knoll. 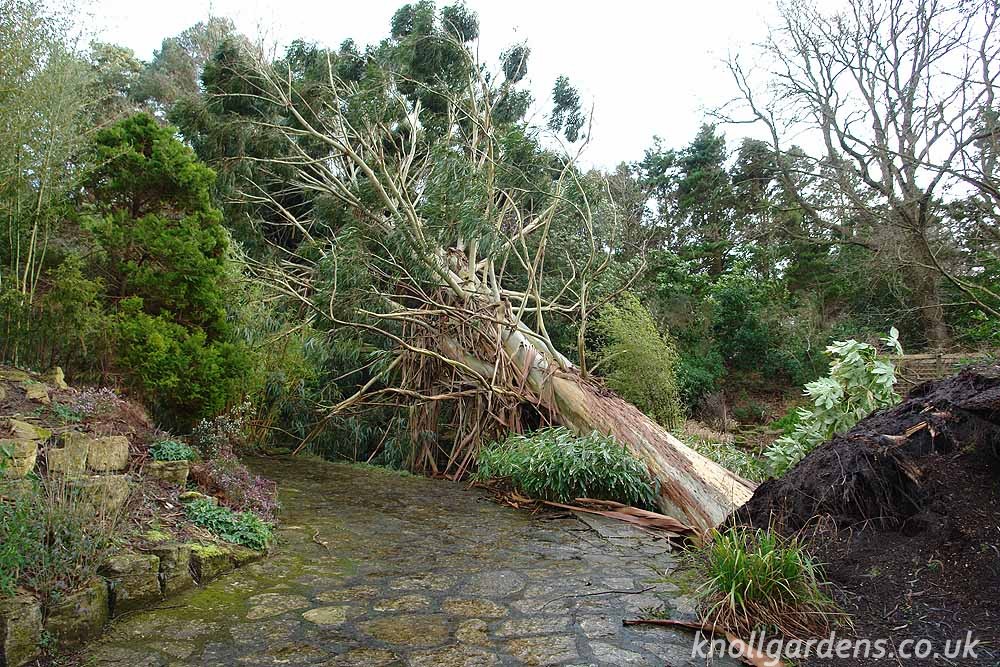 As we closed the nursery and gardens on Valentines Day evening we were happy enough that we had coped with all the damage the initial winters wet and high winds had dealt us. We had lost glass and some plastic, our long main car park fence had all but blown down (it spent christmas being propped up by nursery trailers!), and we had lost 3 large eucalyptus as they had wind rocked; the process by which a perfectly heathly tree blows over simply because its roots lose their grip in the very wet soil. This is always the danger with lots of rain and then high winds; its enough to make anyone responsible for the care of trees a little nervous!

The following morning as I walked around the garden in preparation for opening I realised that our ‘luck’ had rather run out. First I saw the magnificent Pinus radiata, or more correctly the top half of it, lying on and indeed covering a good part of the Lower Lawn. 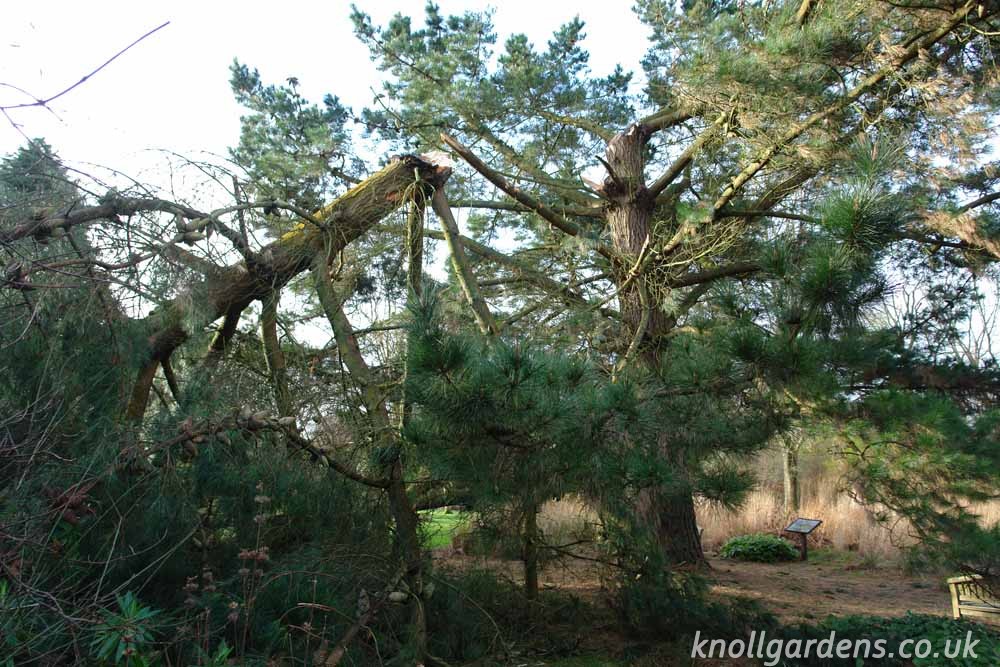 Closer inspection revealed that it had snapped about half way up and that the top half, on its way down, had snapped all the branches on one side of the bottom half leaving a very lopsided shape. Being a pine they do not on the whole re grow so it seems the only option is to remove it now it has been so badly damaged. Our Decennium border was actually designed around this wonderful tree so not only have we lost the beauty of the tree itself but also the shape and layout of the whole border will now be rather different.
Loathe to lose the tree entirely we are looking at the options of having the base section turned into some kind of wood sculpture which at least will be a memento of what was a very fine tree. 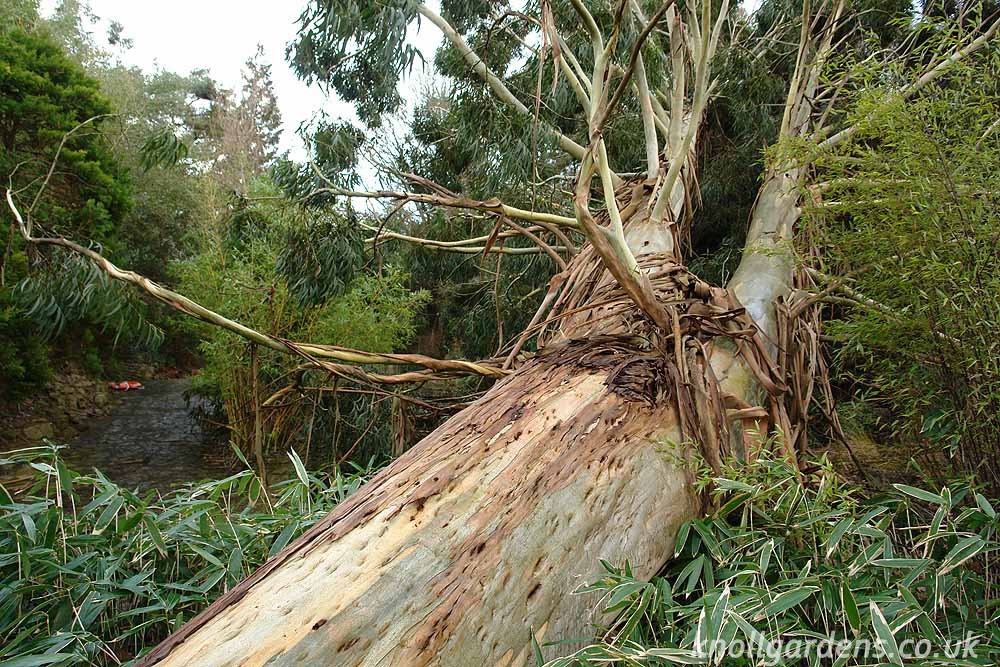 The biggest shock however was reserved for when I walked further up to the Water Garden when it literally was difficult to believe my eyes for the largest most iconic tree in the whole garden had fallen and landed in and over the bottom half of the water garden. It is difficult to adequately describe the majesty of this tree as even when lying prone the sheer size and width of its trunk is quite fabulous. It is so massive that when our tree surgeon first saw it he was initially unable to calculate the cost for its removal!

As with the other smaller eucalyptus it had simply blown over in the high winds as the root plate lost its grip in the soil. It is sobering to think that just one strong gust of wind was able to bring this giant down. As you can see from the pictures the root plate is actually rather wider than our 6ft gardener Luke is tall! 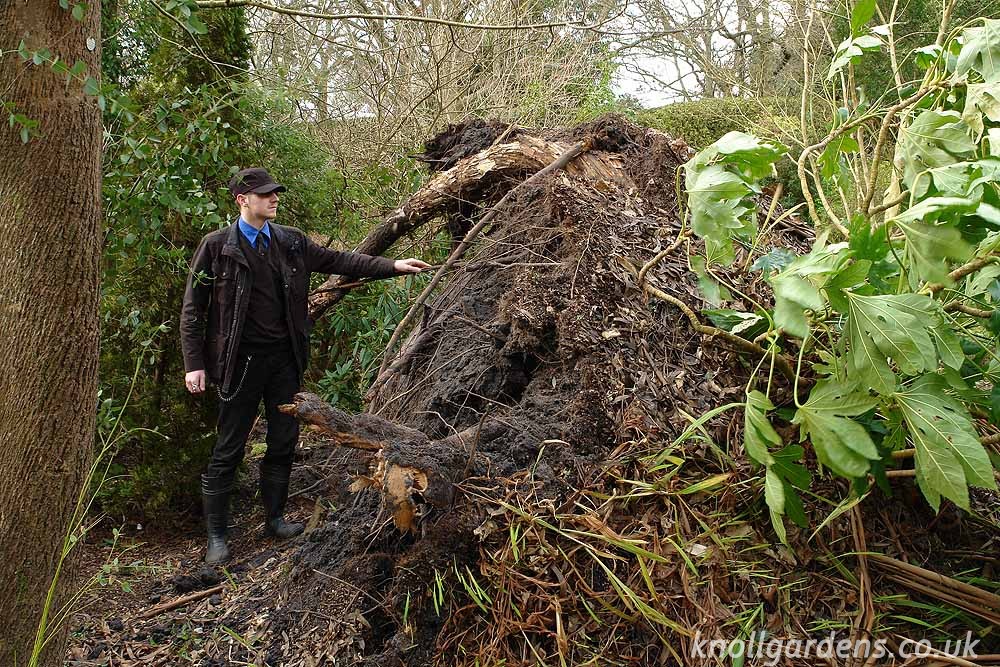 Lots of ideas have been discussed from its complete removal to retaining as much as possible as a feature and a reminder of its once grand status. There has even been some serious discussion about it being a ‘phoenix tree’; one that continues to live and to grow after a catastrophic event such as this. Certainly the way its fallen branches have framed the view of the bottom pond creates a sense of mystery and intrigue that is I have to admit rather lovely. 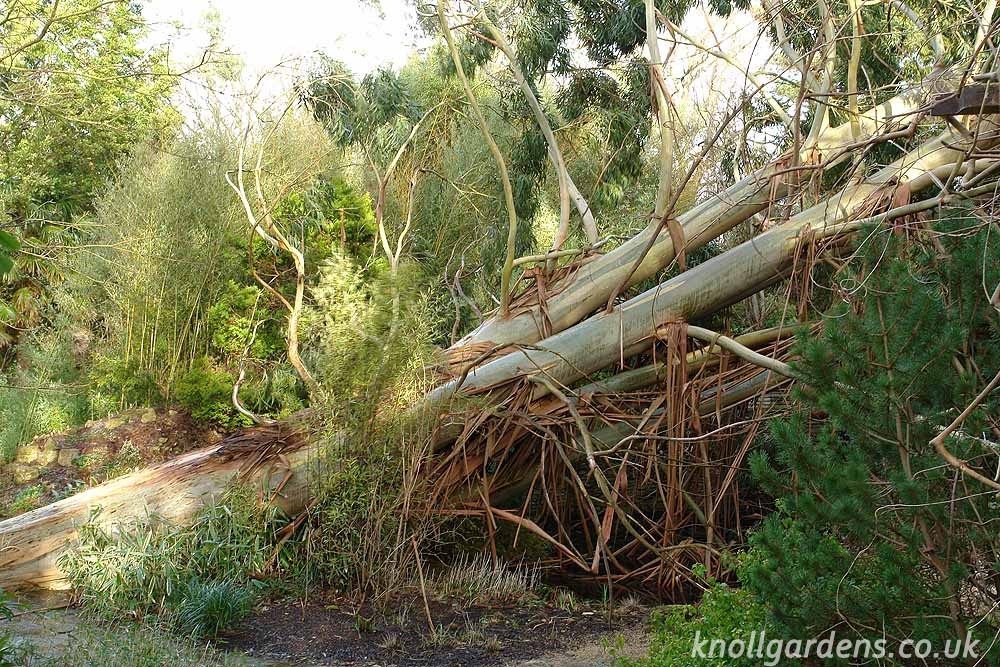 In rare cases such trees have been known to spring back up when the weight of the branch structure was removed, which would be fantistic for our tree, but unlikely as it has sunk so far into the ground and smashed a solid concreted path as though it was matchwood. 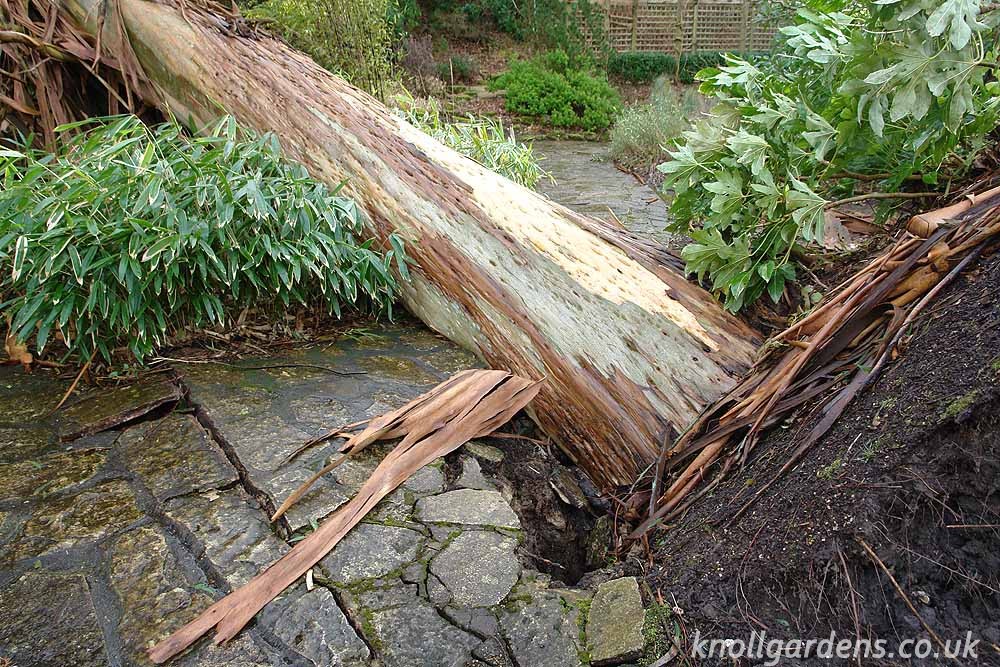 Possibly as serious, and arguably more so long term, is the amount of damage it has done to the water garden ponds which is still an unknown quantity at this stage. Clearly it has emptied the bottom pond as its branches have gone through the lined fabric and as the water garden works on a series of waterfall and ponds at different levels the whole feature is currently inoperable.

The garden will survive of course as nature (and the gardener), never stands still but it is a sad loss of great beauty and leaves us with some practical issues to resolve that will exercise the mind!