With the arrival of September and the almost magical softer autumnal light, the garden comes into its peak season of interest. And it signals the arrival of my favourite time of year. The magnificent group of deciduous grasses offer up their seasonal highs of colour and combined with the many summer flowering perennials and autumn performing woody plants the garden puts on an ever changing show that can last well into November. 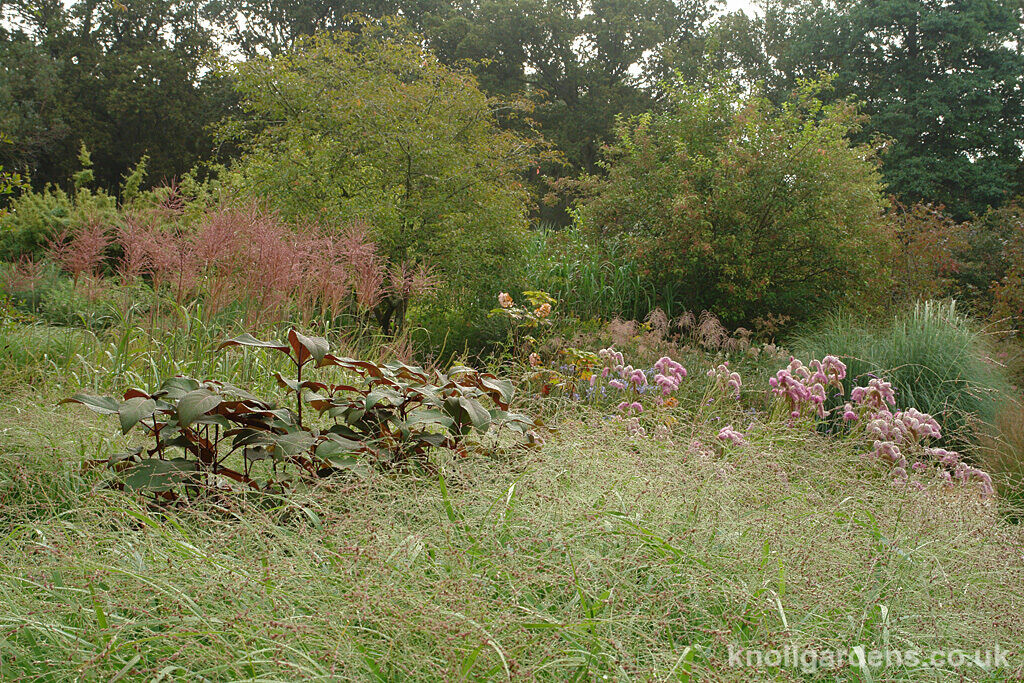 The Long Walk (below), will show a high concentration of late autumnal colour from woody plants such as the spindles, coffee tree and magnolias, but at the moment the summer time perennials like the persicarias are still making a pretty wonderful display. 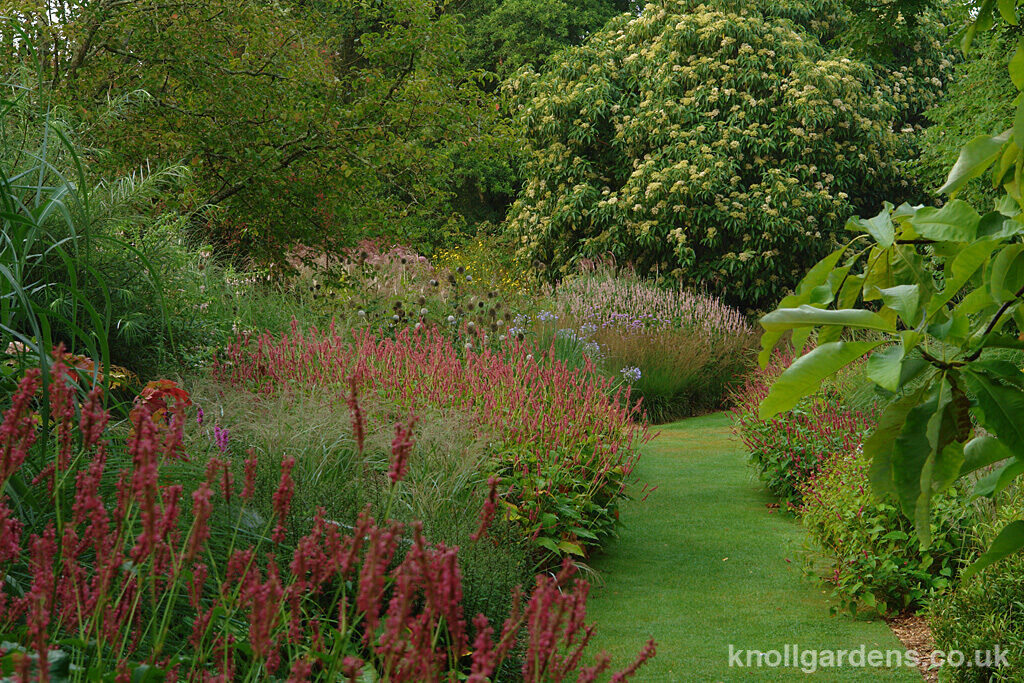 In the Gravel garden (below) there is a high of interest from grasses such as stipa, calamagrostis, poa and panicum. All framed and supported by softer more delicate looking flowers such as Scabious ochroleuca and Gaura Whirling Butterflies. 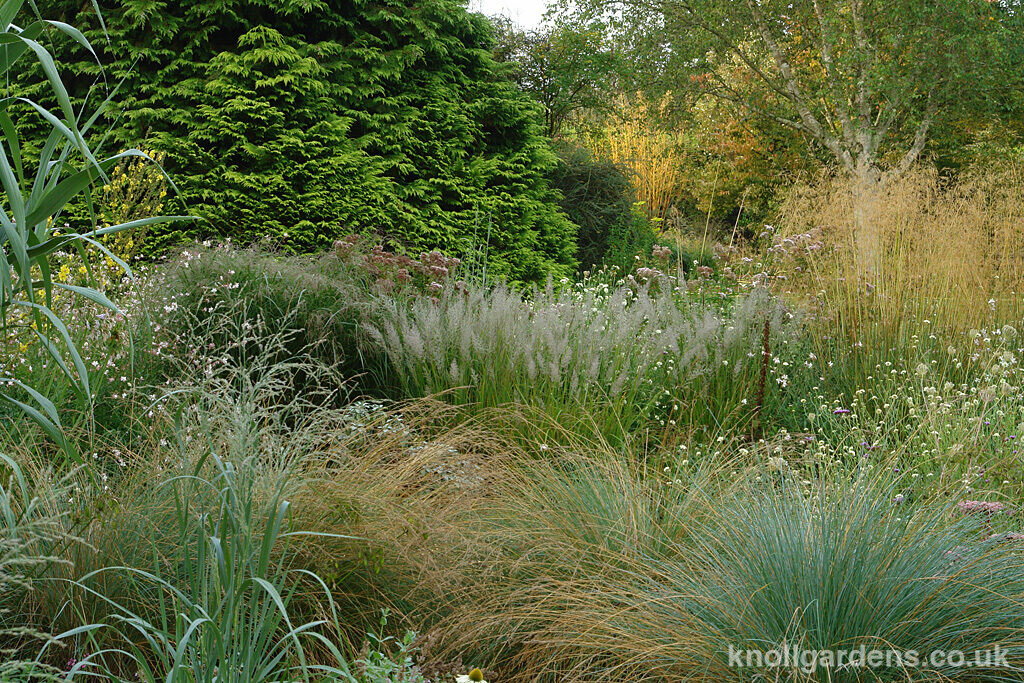 A newly replanted area of the Gravel garden (below), has seen rapid growth on some new catmints such as Nepeta Amelia and Nepeta Poseidon. Even our newly launched Panicum Sea Mist is beginning to demonstrate its glaucous foliage and upright habit. The large grass behind is a form of giant reed, Arundo donax Macrophylla. 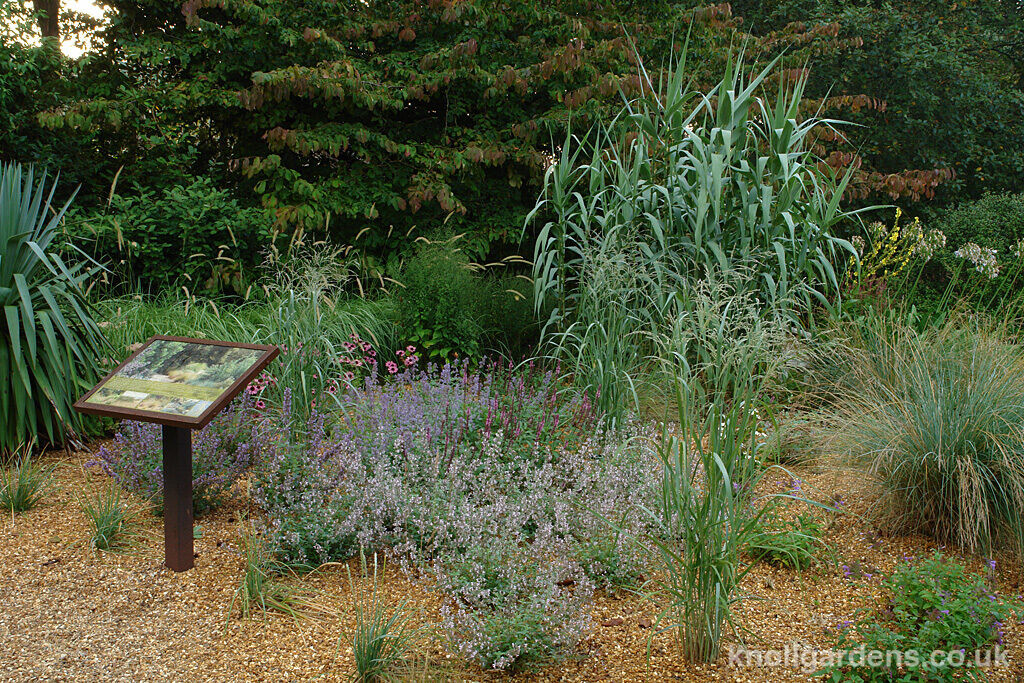 The Decennium border (below), is starting to hint at the autumn spectacular to come, with the, rather later than usual,  dark red flowers of Miscanthus Malepartus and the softer pink  of Miscanthus Flamingo combining beautifully with the domed butterfly attracting heads of Eupatorium Atropurpureum (below again). 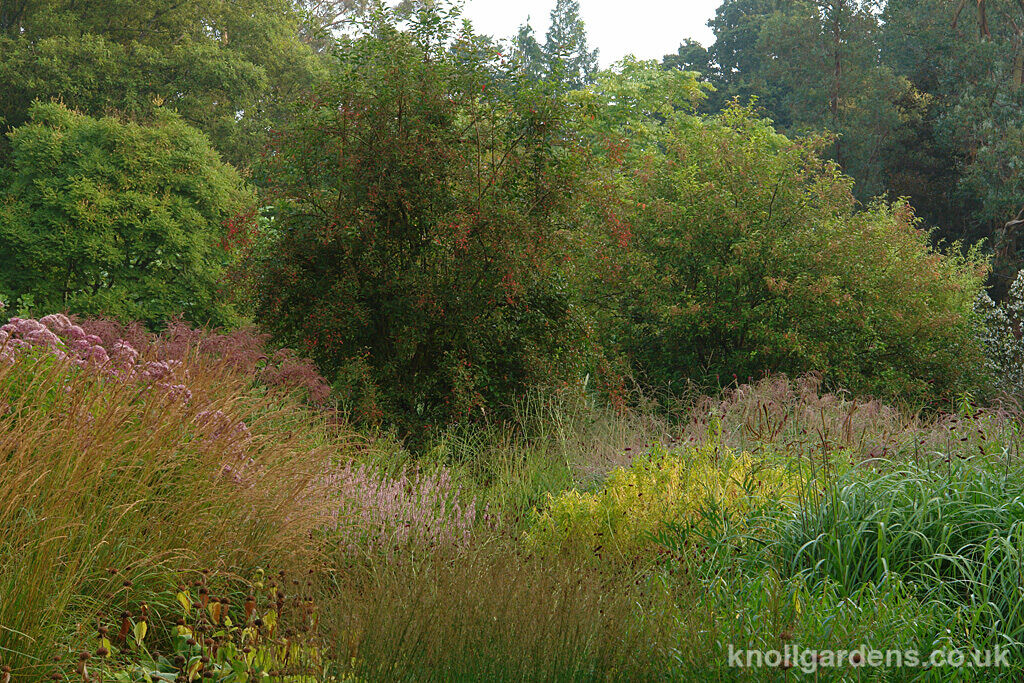 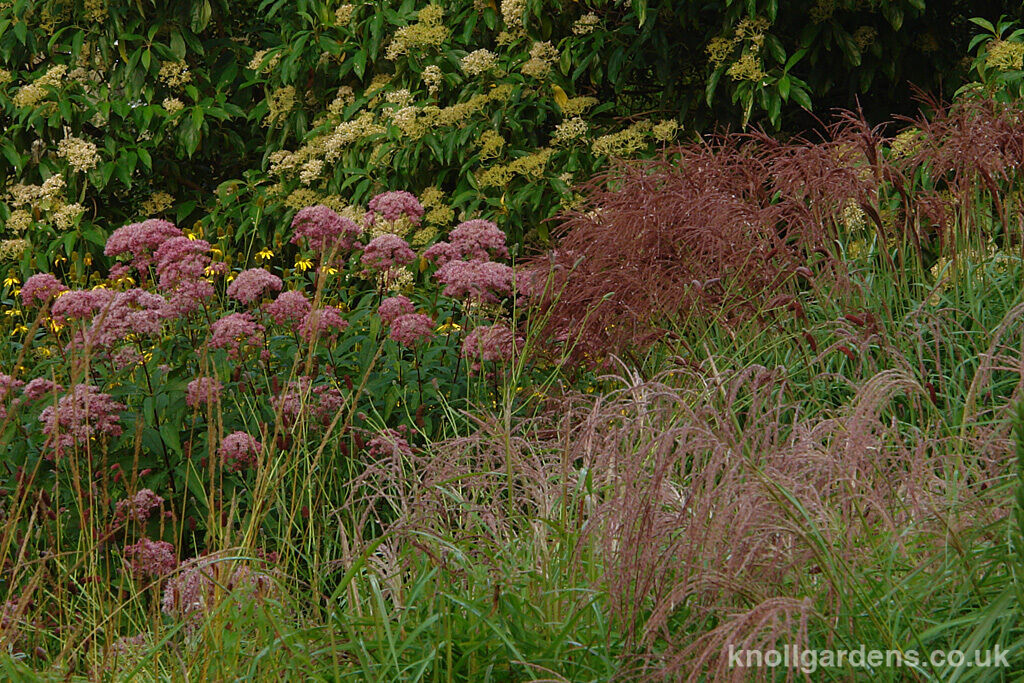 Where the new Rain garden and Dry Meadow meet the fluffy brown effervescence created by the drying flowers of Deschampsia Goldtau (below), merge with the relatively narrow and upright stems of Molinia Dauerstrahl to create an everchanging tapestry of shape, colour and texture. 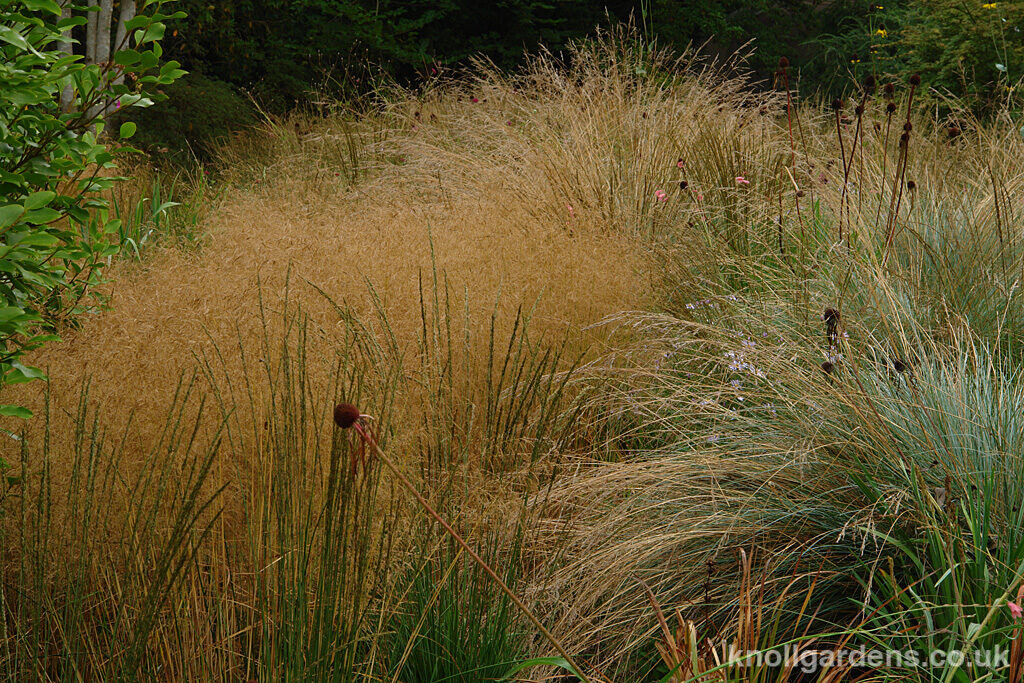 Only a short distance away, and under some mature trees that create a dry shady habitat, Aster (Eurybia) divaricatus that revels in such conditions is now in full sparkling flower (below). 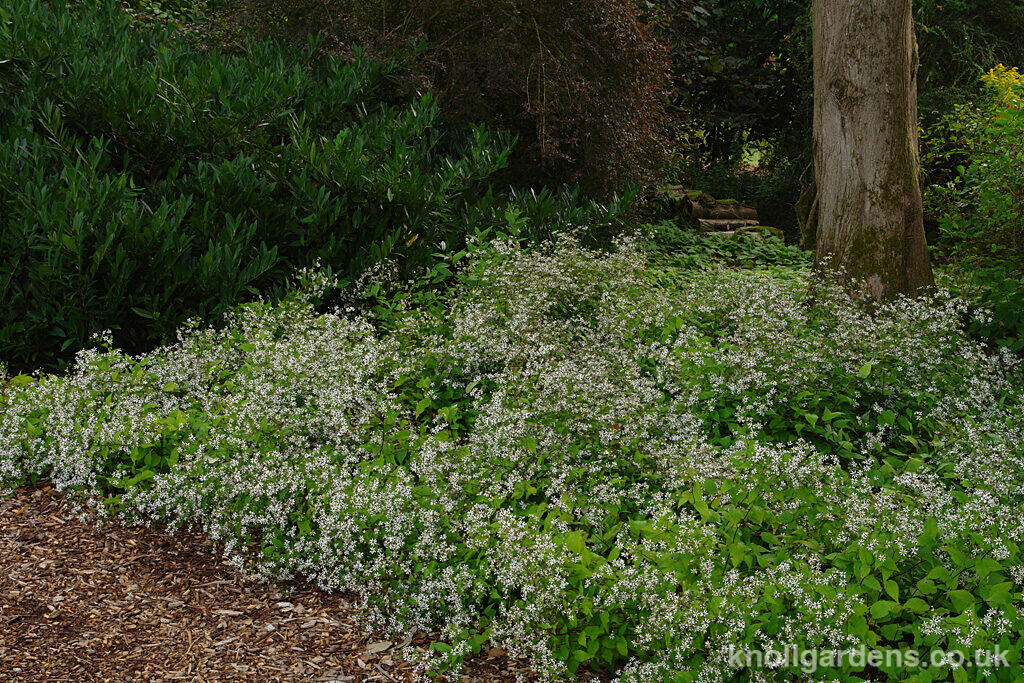 In another part of the Decennium border a Knoll Gardens introduction Miscanthus Cindy has come into full fresh flower, showing off its rounded habit and delicately pendulous pink flowers that are held a little way clear of the leaves. 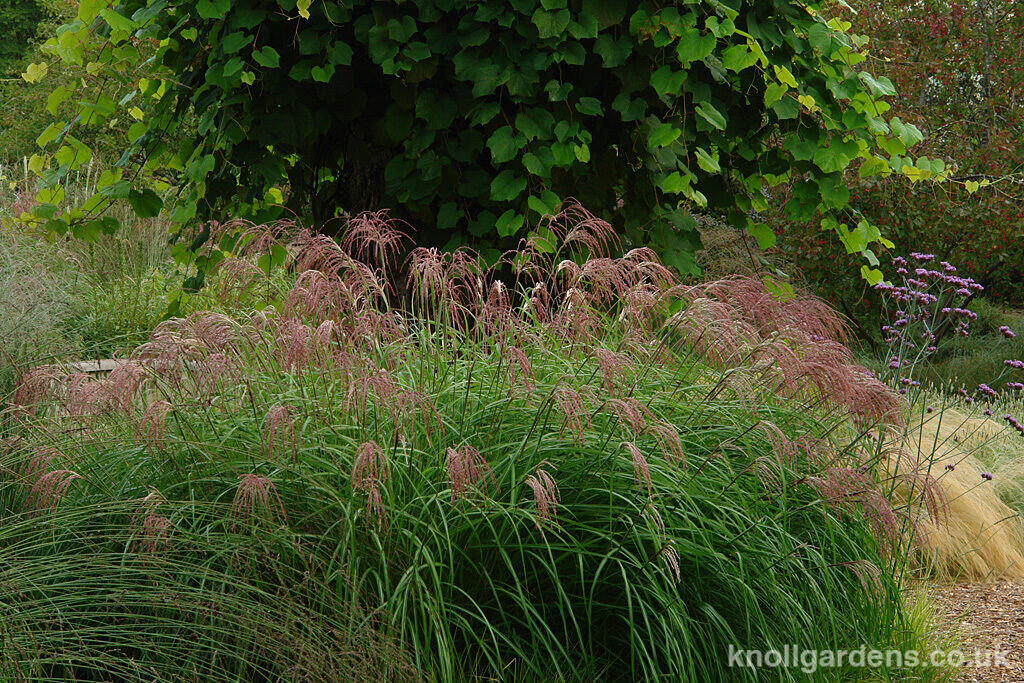 Not to be outdone on the other side of the same border Persicaria Rosea (below), is probably at peak flower right now and it is a great attraction for so many bees, hoverflies and butterflies. The molinia to the left has yet to start its autumnal performance and the large pampas behind is only now starting to push up its almost indecently large flowers. 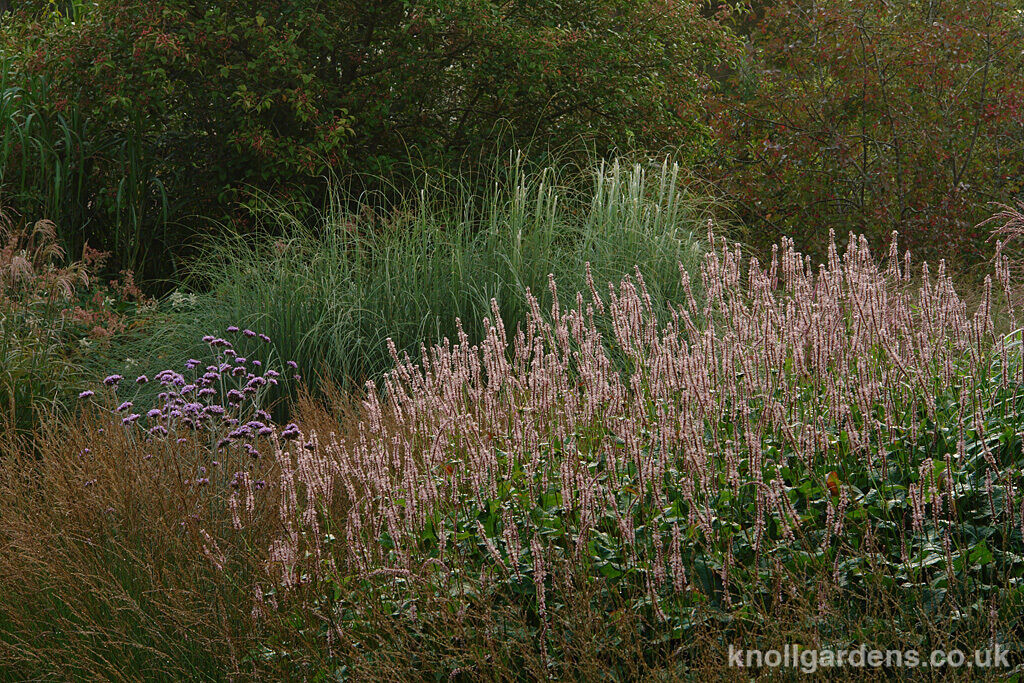 The 2 metre plus mounds of Persicaria polymorpha (now alpina) in the Mill End borders (below), started their display back in early summer but now the initially white flowers take on many shades of pink tones that are scarcely less effective. At the back is the giant reed Arundo donax, which while being noticeably shorter this year thanks to the cold spring still towers over the persicaria, completely obscuring from view the pathway that runs behind. 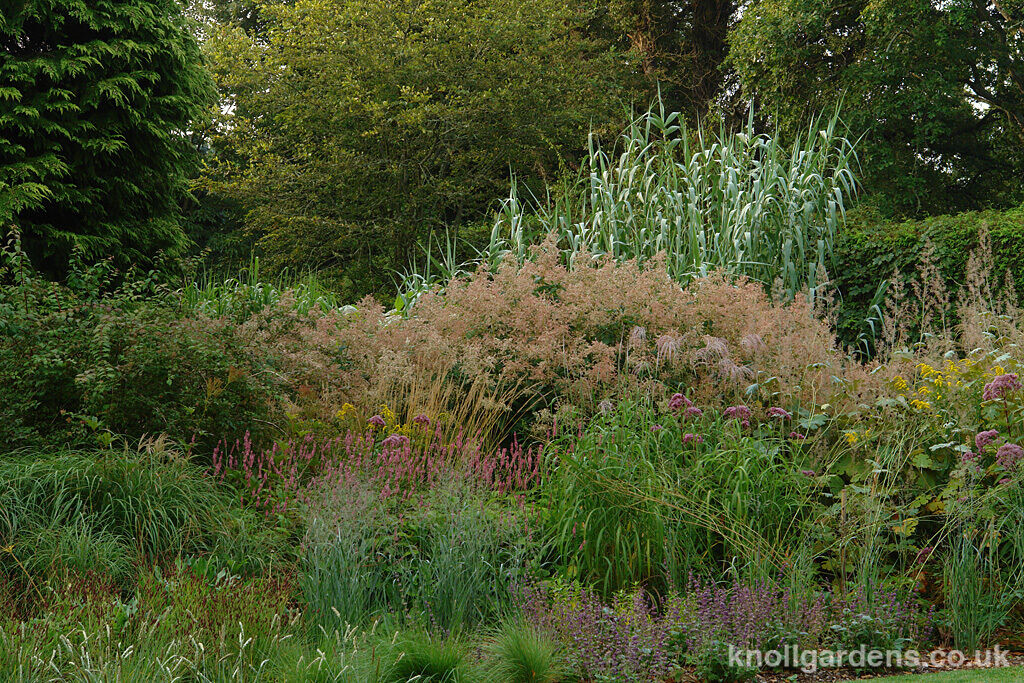 While in this view (below), of a part of the Dragon Garden the ever changing combinations of foliage, flower, height, shape and leaf tone perhaps amply demonstrate just why I love this time of year so much. 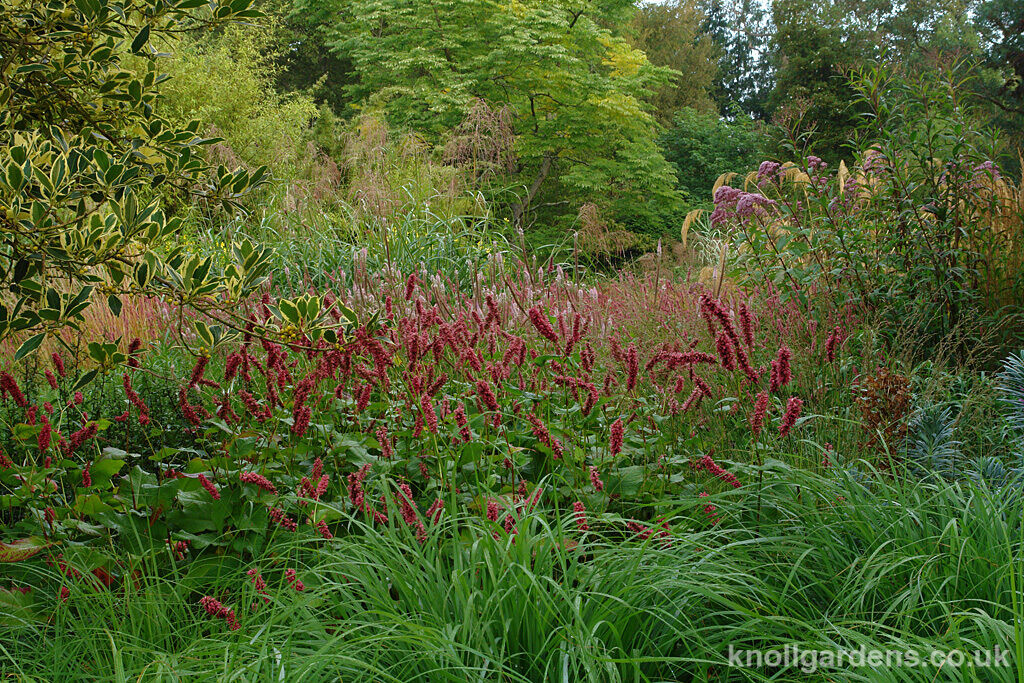